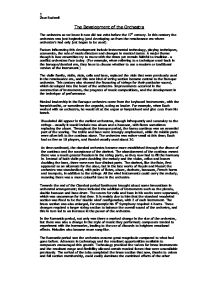 The Development of the Orchestra

The Development of the Orchestra The orchestra as we know it now did not exist before the 17th century. In this century the orchestra was just beginning (and developing on from the renaissance era where orchestra's had only just began to be used). Factors influencing this development include instrumental technology, playing techniques, economics, the role of music directors and changes in musical tastes. A major theme though is how ensembles try to move with the times yet remain faithful to tradition - a conflict orchestras face today. (For example, when referring to a technique used back in the baroque/classical era, they have to choose whether to use a modern or traditional version of the instrument.) The violin family, violin, viola, cello and bass, replaced the viols that were previously used in the renaissance era, and this new kind of string section became central to the Baroque orchestra. This century also showed the favouring of strings for their particular sound, which developed into the heart of the orchestra. Improvements occurred in the construction of instruments, the progress of music compositions, and the development in the technique of performance. ...read more.

It is mainly due to him that the standard woodwind section was fixed to be the 'double wind' configuration, with 2 of each instrument. The brass section was also enlarged, for example his 9th Symphony required 4 horns. These changes required a larger string section to balance the overall sound of the orchestra, and this in turn led to an increase in the power of the orchestra. In the Romantic period, not only was there a marked change in the size of the orchestra, but there was also a change in the style of music they performed; composers tended to experiment with the harmonies, leading to the use of discords to heighten emotional effects. Melodies also became more song-like. The Romantic period saw the orchestra assume great magnitude compared to what had gone before. Advances in technology and the resultant opportunities available to composers encouraged this growth. Technology provided the valves for brass instruments and the resultant range and flexibility allowed certain musical forces that were unavailable previously. The arrival of the tuba completed the brass section that now, thanks to valves and full section membership, could easily dominate the combined efforts of the other sections. ...read more.

Stravinsky's Rite of Spring shows the early 20th century interest in diverse instrumental combinations and original use of the instruments' capabilities. In general, composers of the 20th century have continued exploring novel uses of instruments and have preferred a moderate-sized orchestra. Seventy-five to ninety players is adequate for most 20th century scores. However a reduced or chamber orchestra of classical or baroque dimensions has also been much used. In this century the percussion section is used more prominently; new instruments have been devised and the playing of old ones varied. Overall, The 20th century has been a century of freedom and experimentation with the orchestra. It has also been a time of more well-known conductors, as the conductor has more and more responsibility and visibility. The "basic" 19th century orchestra is still around, and composers will sometimes add or subtract instruments, depending on the effect they want to get. You might see an expanded percussion section, or lots of woodwind and brass. However, the orchestra does still takes more or less the same form: a big string section, with smaller sections for brasses, woodwinds, percussion, harps and keyboard instruments. After all these years, the main outline of the orchestra is still there and continuing to produce new music. 1 Zacc Rodwell ...read more.