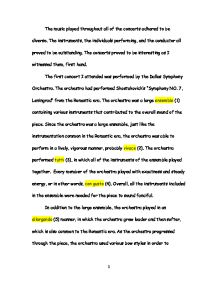 The first concert I attended was performed by the Dallas Symphony Orchestra. The orchestra had performed Shostakovichs Symphony NO. 7, Leningrad from the Romantic era.

The brass and the string had sections in the music, where they were the most important parts. Overall, the Dallas Symphony Orchestra performed well as a whole group. The second concert I attended was performed by the Richardson Symphony Orchestra. The orchestra performed "Passacaglia and Fugue in C minor, BWV 582" by Bach, which is part of the Baroque era. The string instruments of the orchestra performed with the hair of the bow, in other words, arco (7). By using lots of motion or most commonly known as mosso (8), the orchestra increased the tension of the piece. The orchestra played at a pretty fast tempo (9), probably allegro. The piece had a distinct part where the harp played. The ensemble was large, in order to attain the full sound of the piece. The instruments played in the orchestra did not comply with the typical orchestras of the Baroque era because it did not have a distinct part where were the main instruments were the piano and the bass, or more commonly known as basso continuo (10). Along with the use of basso continuo, the orchestra used ornamentation by adding grace notes (11) ...read more.

The piece that the orchestra performed was extensive, which is a common characteristic of the Classical era. The composition reflected a fanciful style, known as caprice (14). The composer used some of the typical characteristics of the Classical era, by making the piece lengthier than those of the Baroque era, but the composer also added a twist by using the piano. The orchestra used both legato and marcato to reflect a whimsical style. The composition most likely included cue notes (15), in order to guide the players who were not playing while the piano was. Similarly to the piece that the Richardson Symphony Orchestra performed, "Menuetto" by Mozart also reflects a fanciful style that uses legato. The composition that the orchestra performed made me feel light-hearted. All of the professional musicians that performed had paid attention to the piano solo, in addition to paying attention to the conductor. Most of the string instruments used the middle part of their bow, in order to play quickly which reflected a fast sound. All of the professional concerts that I attended were a great learning experience but were also a blast to watch. ?? ?? ?? ?? 1 ...read more.