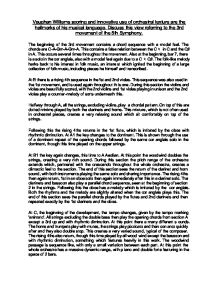 The beginning of the 3rd movement contains a chord sequence with a modal feel. The chords are C-A-Gm-A-Gm-A. This contains a false relation between the C♮ in C and the C# in A. This occurs several times throughout the movement. Also at the beginning, bar 7, there is a solo in the cor anglais, also with a modal feel again due to a C♮C#. The folk-like melody harks back to his interest in folk music, an interest which ignited the beginning of a large collection of folk music, including pieces he himself and transcribed.

At B there is a rising 4th sequence in the1st and 2nd violas. This sequence was also used in the 1st movement, and is used again throughout this one. During this section the violins and violas are beautifully scored, with the 2nd violins and 1st violas playing in unison and the 2nd violas play a counter-melody of sorts underneath this.

Halfway through A, all the strings, excluding violins, play a chordal pattern. On top of this are dotted minims played by both the clarinets and horns. This mixture, which is not often used in orchestral pieces, creates a very relaxing sound which sit comfortably on top of the strings.

Following this the rising 4ths returns in the 1st flute, which is imitated by the oboe with rhythmic diminution. At A1 the key changes to the dominant. This is shown through the use of a dominant repeat of the opening chords followed by the same cor anglais solo in the dominant, though this time played on the upper strings.

At B1 the key again changes, this time to A Aeolian. At this point the woodwind doubles the strings, creating a very rich sound. During this section the pitch range of the orchestra extends which, partnered with the crescendo throughout the whole orchestra, creates a climactic feel to the section. The end of this section sees the return of the clarinet and horn sound, with both instruments playing the same solo and sharing importance. The rising 4ths then again return, 1st in an oboe solo then again immediately after this in a clarinet solo. The clarinets and bassoon also play a parallel chord sequence, seen at the beginning of section 2 in the strings. Following this the oboe has a melody which is imitated by the cor anglais. Both the rhythms and the melody are slightly altered when the cor anglais plays this. The end of this section sees the parallel chords played by the flutes and 2nd clarinets and then repeated exactly by the 1st clarinets and the oboe.

At C, the beginning of the development, the tempo changes, given by the tempo marking 'animato'. All strings excluding the double bass then play the opening chords from section A except a 3rd up and with rhythmic diminution. At this point there a many different sounds. The horns and trumpets play with mutes, the strings play pizzicato and then con arco quickly after and they also double stop. This creates a very varied sound, typical of the composer. The rising 4ths also return, though this time played by all woodwind except the bassoon and with rhythmic diminution, something which features heavily in this work. The woodwind passage is sequence like, with only a small variation between each part. At this point the whole orchestra has a massive dynamic range, with piano and double forte featuring in the space of 2 bars.

A2 sees a recapitulation. First starting in double forte, there is a two bar diminuendo to piano which allows a horn solo to join. This solo is the folk-like passage from the beginning and is played in the original key. The tempo then increases slightly and the brass play a loud and very bold sounding feature, the first time the brass is heard as a full section. However, this lasts just 6 bars, at which point the oboe and clarinets, doubled by the violins, play the rising 4ths passage, again with rhythmic diminution. This passage is an imitative section, in which different combinations of strings and woodwind mimic each other, all reusing material from figure 2. Following this the original chord sequence returns, played a minor 3rd up. At this point there is continued development of the rising 4th passage. The key then changes to the starting key with the same chord progression. The violins are then imitated by the violas and cellos, creating an unsettling sound.

At B2 the key changes to A Aeolian, the same key as B1. The material used here varies heavily from section B. The brass is stronger, featuring all the section for just the 2nd time in the piece, the timpani joins and the 1st violins play at an extremely high pitch, all indicating the climax to the piece. There is also no cello solo like there was in B. Following this, all instruments gradually fade out, leaving just a solo violin.

At the coda, the solo violin begins on its own, playing the rising 4th passage used so often throughout the piece and is imitative of the flute solo from 2. The violin then fades to nothing, which is where the clarinets, bassoon and horns pick up with the original chord sequence seen at the beginning, emphasised by the double bass playing the root notes pizzicato at the start of each bar. The key then changes to C major, with the heavily featured chord sequence played in the same key as the beginning. The key then changes again to the relative minor, Am. Following this, the piece finishes with a plagal cadence, although it is a Tierce de Picardie, finishing on A Major.

From this, we can see that Williams is a master at reusing material seen previously, whether it was seen in an earlier movement, the same movement, or a different piece altogether, such as Pilgrim's Progress. This shows his innovative use of scoring as, despite having used material before, the reused material never sounds out of place, whether it be to a relative newcomer to orchestral music or to a more experienced listener.