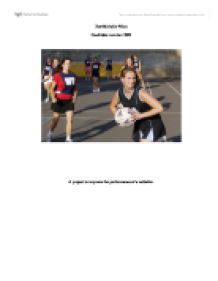 Zo� Michelle Wiles Candidate number: 2922 A project to improve the performance of a netballer. Section A - Abstract The aim of the project was to look at a performer, identify their major weakness through observation and to improve the performance of a netball player by improving this major weakness which was shown to be the component of power. My hypothesis was that the use of a progressive weight training programme improved the power of a netball player. As a result of the training programme the player avoided more interceptions and passed the ball for longer, more accurate distances in competitive match situations. The performer carried out a six week training program particularly focussing on Quadricep and Hamstring work and Bicep/Tricep work using resistance machines, stretches, based on research theories taking into account personal needs of the performer by looking at power with the inclusion of multiple fitness tests. The test results before and after the exercise program show if the weakness had been improved. The results showed an improvement in passing by 15% and intercepting by 68%. As a result of the findings, the research hypothesis was accepted as possibly there was an improvement in the appropriate energy systems which resulted in skeletal muscular hypertrophy and therefore increased the performer's power and their overall game situation. Word count: 198 B1. PLANNING Week / Date Section What I intend to do What I did / achieved Week 1: 10th Sept 07 B Find a performer to analyse for the game of netball. Asked performer to be my subject. Performer agreed. Week 2: 17th Sept 07 B C This week I intend to write my plan for the upcoming 23 weeks. Produce match analysis sheets - tally charts. Filled in each section week by week explaining what I intend to do with my project. I created my match analysis sheets for both quantitative and qualitative data. ...read more.

Progression and Overload allowed an ensured increase in the component of power. I decided to include the use of resistance machines in the 6 week program. Many machines use a stack of weight as a means of resistance. By the use of cams, cables, gears and pulleys, the resistance from the weight stack can be controlled by one specific movement. Still other machines may require giant springs or rubber bands to provide resistance, which may be less capable of gradual increases in resistance. Some rather large multi-station weight machines allow a variety of exercises for a full body workout. The likelihood of injury is less because most of the machines guide your motions so controlling the weight is much easier. Machines also help maintain good form and posture and protect the lower back. The number one factor in any strength-training program is safety! Machines are not usually as intimidating as free weights. It is much easier to insert a pin in a stack than to put weights on a barbell. Little skill is required and machines are highly suitable for special populations, including the elderly. Machines allow you to focus on a single muscle group through a full range of motion for effective training. Machines can be designed to provide resistance to body movements that are difficult to train with free weights (e.g., multi-hip machines). However, each machine has only a limited number of functions. Each maneuver takes place on only one plane and therefore is not very life-like or sport specific. Machines are very hard to store. Unlike free weights, you cannot put machines in the closet or under the bed. Machines are designed for the average size person. Seat height can often be adjusted, but usually little can be done for differences in arm and leg lengths of the taller or shorter than average person. (1) Resistance machines are safer to use than the free weights due to the overall strength of the muscles. ...read more.

A training partner is a really good way of getting the most out of gym sessions, training consistently and making the experience far more enjoyable. A training partner is highly beneficial. When lifting weights, particularly free weights, a partner can 'spot' for you. This can involve helping you move the weight from the rack to the start position, or back onto the rack at the end of the set. The use of varied training practices would also help to keep motivation levels up. The inclusion of plyometrics into the program would allow deviation from the general resistance machines and therefore keep the performer interested and on the ball. Plyometric exercises exploit the stretch-shortening cycle of muscles. This involves rapid alternation of lengthening and shortening of muscle fibers against a resistance. The resistance involved is often a weighted object such as a medicine ball but can also be the body itself as in jumping exercises. (4) Plyometrics is used to develop explosive speed, and focuses on power instead of maximal strength. The performer could also use free weights in their program. Free weights are dumbbells, barbells, and kettle bells. They do not constrain users to specific fixed movements and therefore require more effort from the individual's muscles. Weight machines are safer than free weights for novice trainees. Users can focus more on the effort they are putting into the exercise. One limitation of many free weight exercises and exercise machines is that the muscle is working maximally against gravity during only a small portion of the lift. Another issue that arose with the personal exercise program was the duration of the training. Next time I would increase the length of time that the performer would train for. By increasing the length from 6 weeks to 12 weeks would allow the performer to become more accustomed to the program itself and would allow alterations to training days/weights if any kind of problems occur. The 12 week program would be more suited and could show greater difference in pre and post testing as it would increase the chances of muscular hypertrophy. ...read more.