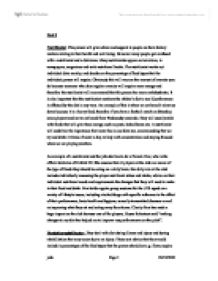 Achieving Peak Performance - the role of other professionals. Nutritionist,Physiotherapist/Doctor,Psychologist, Coaches and Manager.

Part 2 Nutritionist- This person will give advice and support to people on their dietary matters relating to their health and well-being. However many people get confused with a nutritionist and a dieticians. Many nutritionists appear on television, in newspapers, magazines and write nutritional books. The nutritionist works out individual diets mainly, and decides on the percentage of food types that the individual person will require. Obviously this will vary on the amount of exercise you do because someone who does regular exercise will require more energy and therefore the nutritionist will recommend that this person has more carbohydrates. It is also important that the nutritionist monitors the athlete's diet to see if performance is affected by the diet in any way. An example of this is when we eat bread it slows us down because it is a heavy food, therefore if you have a football match on Saturday, some players tend not to eat bread from Wednesday onwards. They will usually stick with foods that will give them energy, such as pasta, baked beans etc. A nutritionist will underline the importance that water has in our diets too, recommending that we try and drink 2.5litres of water a day, to help with concentration and staying focused when we are playing matches. ...read more.

The reasons have to be established so that the health of the individual is not affected. Eating disorders occur in endurance athletes and sports where a certain weight has to be maintained. Other athletes consume too many calories which affects performance. The psychologist has to monitor the individual's needs for 'feel good' foods which athletes think improve their performance. Psychologists deal in the way the mind works and motivation, and can specialise in many different areas such as mental health, counselling, forensic and educational psychologist. They help provide mental care for people that have eating disorders. Some players do not eat the right foods that they have been told to eat and therefore struggle to stay within the body weight restrictions so they need to see a psychologist to help with their disorder. It is important that the psychologist can help the players take their minds off the 'feel good' foods that satisfy them, other wise the player will end having his contract terminated. A good example of a psychologist is when Tony Adams had a problem with alcohol addiction, and he even confessed that he played some matches for Arsenal while he was still drunk. ...read more.

It is important that the backroom staff work as a team to get the best out of the players and make sure that they are 100% fit. The manager will want to know why the player has an injury and what caused it, whether they are doing well in training or not and whether they have stayed loyal to the diets that the nutritionist has set them. The information that the manager will receive will ultimately help him make his decision on whether or not to select the player in the next match. An example of a manager is Jose Mourinho, the Chelsea manager. When he was appointed the Chelsea manager, he decided to recruit the staff that he used at his previous club FC Porto. He decided to sack most of the Chelsea staff that was already at the club and use the staff that he knew much better at FC Porto. He did this probably because he has worked with these members of staff before and he could trust them to the job well for his new club. The new staff that he recruited might operate in a different way e.g. they might set the players different diets or training schedules that could give players more or less freedom to eat or do what they want. josh Page 1 05/12/2010 josh Page 1 05/12/2010 ...read more.