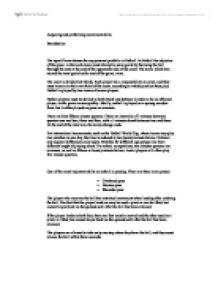 Acquiring and performing movement skills. Introduction The sport I have chosen for my personal portfolio is Netball. In Netball the objective of the game is that each team must attempt to score goals by throwing the ball through the nets at the end of the opponents side of the court. The team, which has scored the most goals by the end of the game, wins. The court is divided into thirds. Each player has a responsibility on court, and they must remain in their own third of the court, according to which position they play. Netball is played by two teams of seven players. Netball players must be skilled in both attack and defence in order to be an efficient player, as the game moves quickly. Ideally, netball is played on a sprung wooden floor, but is often played on grass or concrete. ...read more.

It is a flat pass, which means it will go from player to player in a straight line. As well as being used for passing quickly the chest pass is often used during throw ins and when in the attacking zone. When using the chest pass you need to place your hands correctly around the ball. Your fingers should be in a 'W' shape behind the ball with your thumbs touching, holding the ball at chest height. Again with this pass, when throwing the ball step forward with one foot giving more force behind the ball. You need to use lots of force from your arm muscles (biceps, triceps, etc) keeping your elbows close to your body, with wrists pointing upwards. Bounce pass When a player of the opposite team is close to you and you need to act quickly you are best to use the bounce pass. ...read more.