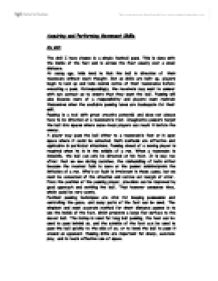 Acquiring and Performing Movement Skills My skill The skill I have chosen is a simple football pass. This is done with the inside of the foot and is across the floor usually over a small distance. At young age, kids tend to kick the ball in direction of their teammate without much thought. But as skills are built up, players begin to look up and take mental notice of their teammates before executing a pass. Correspondingly, the receivers may want to answer with eye contact as to ensure that they want the ball. Passing will also become more of a responsibility and players must restrain themselves when the available passing lanes are inadequate for their skill. Passing is a tool with great creative potential and does not always have to be directed at a teammate's feet. Imaginative passers target the ball into spaces where same-team players can reach it before the enemy. A player may pass the ball either to a teammate's feet or in open space where it could be collected. Both methods are effective and applicable in particular situations. Passing ahead of a moving player is required when he is in the middle of a run. ...read more.

Too little weight and the ball doesn't reach the target....too much and it is difficult to trap. 2. Accuracy. The plant foot is a big determiner of where the pass will go. Generally the pass will go where the plant foot toes point. You'll see a lot of toes turning outward at the beginning. This should be corrected. 3. Stress that the player should not step back to kick the ball. A common error at the young ages is for the player to stop the ball, take one or two steps back and then pass it. Again work both the dominant and non-dominant foot. Build success first with the dominant foot and then begin to work the non-dominant foot at a rate equal to twice that for the dominant one. Intermediate Basic Passing Progression #2 -The Triangle The basic "shape" on the soccer field is the triangle. And the first basic tactical concept, which we will not go into in depth here, is the concept of support. In its simplest form the concept of support should find the ball carrier with players to his/her right and left giving him passing options. ...read more.

On a go signal, players dribble across the square, stop the ball with a foot on it, say "Trick or Treat ", take a cone from an adult, turn the ball, dribble back across, take a cone, etc. When all the cones are gone, who has the most? This requires dribbling at speed, avoiding the clump in the middle, controlling the ball around an opponent, but minimal coordination holding the cones. After a few rounds dribble across the square, dribble around the coach, and then stop the ball, say "Trick or treat," etc. Or place the adults randomly in the square, moving at a walking pace. This makes them keep their heads up and look for the target (i.e. the adult) Basic Passing Game 5 Players are numbered 1 to 5. (Make multiple teams and keep the numbers low so each player gets multiple touches on the ball.) Players pass the ball to the player with the number one higher than their own. (e.g. 1passes to 2, 5 to 1). Ball travels through the entire team. Progressions: * Initially, allow unlimited touches, players in static positions * Then two touches, not allowing the ball to stop * Then one touch. * Try playing with left foot only * Outside of foot only * With movement through a designated area ...read more.