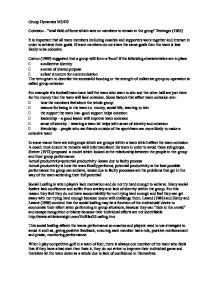 Group dynamic. It is important that all team members including coaches and supporters work together and interact in order to achieve their goals.

Group Dynamics M3/D2 Cohesion - "total field of force which acts on members to remain in the group" Festinger (1963) It is important that all team members including coaches and supporters work together and interact in order to achieve their goals. If team members do not share the same goals then the team is less likely to be cohesive. Carron (1980) suggested that a group will form a 'bond' if the following characteristics are in place � a collective identity � a sense of shared purpose � a clear structure for communication The term given to describe the successful bonding or the strength of collective group co-operation is called group cohesion For example if a football team have half the team who want to win and the other half are just there for the money then the team will lack cohesion. ...read more.

identity and cohesion � friendship - people who are friends outside of the sport/team are more likely to make a cohesive team In some teams there are sub groups which are groups within a team which affect the team cohesion. A coach must ensure he remains well informed about his team in order to avoid these sub groups. Steiner (1972) proposed a model which looked at the relationship between the people in the group and their group performance Actual productivity=potential productivity-losses due to faulty process Actual productivity is how the team finally performs, potential productivity is the best possible performance the group can achieve, losses due to faulty processes are the problems that get in the way of the team achieving their full potential Social Loafing is when players lack motivation and do not try hard enough to achieve. ...read more.

Latan� (1986) and Hardy and Latan� (1988) contend that the social loafing may be a function of the individuals' desire to economize their effort when performing in group situations, because they can "hide in the crowd" and escape recognition or blame because their individual efforts are not identifiable http://www.athleticinsight.com/Vol8Iss2/Loafing.htm This social loafing affects the teams performance so coaches and players need to use strategies to avoid it such as, giving positive feedback, ensuring each member has a role, positive reinforcement and praise, monitoring performance. When I play competitive golf in a team of four, there is always one member of the team who feels that if they have a bad start then thats it, they do not strive to improve their individual game and therefore let the team down as a whole due to lack of confidence in themselves. ?? ?? ?? ?? ...read more.