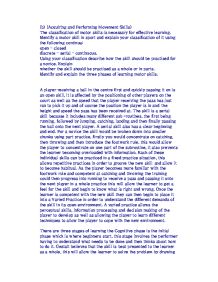 (b) (Acquiring and Performing Movement Skills) The classification of motor skills is necessary for effective learning. Identify a motor skill in sport and explain your classification of it using the following continua: open - closed discrete - serial - continuous. Using your classification describe how the skill should be practised for a novice. Explain whether the skill should be practised as a whole or in parts. Identify and explain the three phases of learning motor skills. A player receiving a ball in the centre first and quickly passing it on is an open skill, it is affected by the positioning of other players on the court as well as the speed that the player receiving the pass has just ran to pick it up and of course the position the player is in and the height and speed the pass has been received at. The skill is a serial skill because it includes many different sub-routines, the first being running, followed by jumping, catching, landing and then finally passing the ball onto the next player. A serial skill also has a clear beginning and end. For a novice the skill would be broken down into smaller chunks using part practice, firstly you would concentrate on catching, then throwing and then introduce the footwork rule, this would allow the player to concentrate on one part of the subroutine, it also prevents the learner becoming overloaded with information. ...read more.

The associative stage is the stage of practice, trial and error is vital during this stage and the performer will act on both intrinsic and extrinsic feedback, the performer will begin to get a feel for the skill allowing intrinsic feedback to occur. The performer will begin to link the mental model with the practice. Again here verbal guidance is vital in order to direct and correct the performer. The Autonomous stage is where the movement is almost automatic it is overlearned and the Stimulus response bond is grooved. The movement looks fluent and is carried out with little conscious control, The motor programme has been formed, however practice must continue inorder to prevent the performer returning to the autonomous stage. (e) (Psychology of Sports Performance) Motivation in sport can be affected by achievement motivation and attribution for performance outcomes. Motives to achieve are more productive in sports performance than motives to avoid failure. * Describe the characteristics of performers who need to achieve in sport. * Explain what is meant by learned helplessness in sport * Explain how you would help a sports performer to reattribute to avoid learned helplessness and to promote mastery orientation. The performers who need to achieve success in sport tend to approach challenges, they are not afraid of failure and are extremely competitive, ...read more.

It would also be a good idea to control the performers state anxiety, if the perception of the demands is high then the player is more likely to become anxious, this can be fixed through verbal persuasion, explaining to the player that the skill isn't that hard and then showing them a demonstration and so using visual persuasion too. The importance of the situation can also cause anxiety, however the coach can explain situation isn't that important. And then the perception of the performers ability to cope may also cause them anxiety, meaning that the coach will need to draw on previous experiences where the performer excelled to persuade them that they are good enough. Goal setting can also be used in order to ensure the performer does come out of the state of learned helplessness, using SMARTER * S - goals must be Specific * M - training targets should be Measurable * A - goals should be Adjustable * R - goals must be Realistic * T - training targets should be Time based * E - goals should be challenging and Exciting * R - goals should be Recorded When the player hits the targets this will give them a sense of achievement and give them some more self confidence. ...read more.