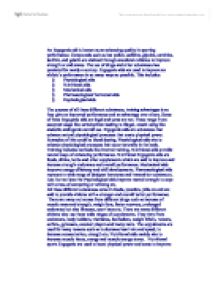 An Ergogenic aid is known as an enhancing quality in sporting performance. Compounds such as bee pollen, caffeine, glycine, carnitine, lecithin, and gelatin are claimed through anecdotal evidence to improve strength or endurance.

An Ergogenic aid is known as an enhancing quality in sporting performance. Compounds such as bee pollen, caffeine, glycine, carnitine, lecithin, and gelatin are claimed through anecdotal evidence to improve strength or endurance. The use of drugs and other substances has persisted for nearly a century. Ergogenic aids are used to improve an athlete's performance in as many ways as possible. This includes: � Physiological aids � Nutritional aids � Mechanical aids � Pharmacological/ hormonal aids � Psychological aids The purpose of all these different substances, training advantages is as they give an improved performance and an advantage over others. Some of these Ergogenic aids are legal and some are not. These range from accepted usage like carbohydrate loading to illegal, unsafe using like anabolic androgenic steroid use. Ergogenic aids are substances that enhance natural physiological processes that create physical power. Examples of this could be blood doping. Physiological aids aim to enhance physiological processes that occur naturally in the body. Training includes methods like interval training. Nutritional aids provide natural ways of enhancing performance. Nutritional Ergogenic aids are foods, drinks, herbs and other supplements which are said to improve and increase strength endurance and overall performance. Mechanical aids improve energy efficiency and skill developments. Pharmacological aids represent a wide range of designer hormones and transmitter substances. Last but not least the Psychological aids improve mental strength to cope with stress of competing or winning etc. All these different substances come in foods, powders, pills etc and are said to provide athletes with a stronger and overall better performance. ...read more.

Out of many sports, I would say that mainly athletics and football get drug tested the most. They are both very popular sports and the athletes have a large amount of pressure to give the best performance ever and to be noticed. Some of the nutritional supplements that are taken can be harmless and do not contain illegal substances such as Creatine, carbohydrate supplements such as sports drinks etc. Creatine and bicarbonate supplements are both practical and useful during high intensity work. Creatine supplementation can raise muscle Creatine phosphate levels for use in the ATP-CP energy system. Alkaline salts, such as sodium bicarbonate (baking soda), can help to reduce the effect of lactic acid and delay exhaustion. Caffeine is also a performance enhancing supplement as it is a central nervous system stimulant. If you are competing, a caffeine level in the urine above 12mg/l is not permitted. This level will be achieved by taking about 7 cups of coffee in a short time. Caffeine is also a diuretic, which can make you dehydrated. The substances that are more serious and most common in sports are ones such as androgenic anabolic steroid. These are a group of both natural and synthetic compounds which are very similar to the natural male hormone known as testosterone. The effects of this is the anabolic stimulates the build up pf muscle tissue and the androgenic promotes the development of male characteristics. In athletics, a sprinter who uses steroids for performance enhancing, would only need a 10 % improvement to change from a boarder line international athlete to a world record holder. ...read more.

Another athletics athlete, CJ Hunter, an American shot putter failed four drug tests yet used the excuse of blaming nutritional supplements for his out come. He failed four separate tests for the banned steroid nandrolone while competing in Europe this summer. Taking into consideration the amount of athletes participating in these sports and so little get tested positive for using performance enhancing drugs, it makes you think how many people exactly are in on the drug scheme. It is clearly obvious that a lot more athletes take these drugs but are some how getting away with it, due to private doctors, some claiming that they have consumed contaminated nutritional supplements and so on. I think that a lot more research needs to be done and for the government to take a more drastic approach to those who feel it is acceptable to take drugs to enhance their sporting performance. A larger fine should be given and a life time ban if proven guilty and no other reason suggesting otherwise. If a longer ban is given, it would put athletes off taking drugs a lot easier and quicker leading to drug free sports, better and maybe more participation and a wider range of publicity for the right reasons. If a harsher approach was given, it would give athletes a more respectable approach towards their sport and make more take it more seriously. More surveys should be done and more talks within the teams, sports, countries should be given on the responsibilities of each individual and the effects cheating can have on one's career. ...read more.