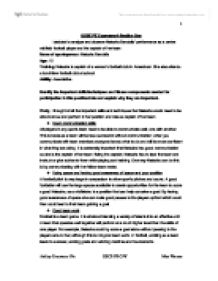 GCSE PE Coursework Section One I decided to analyse and observe Natasha Sandalls' performance as a centre midfield football player and the captain of her team. Name of sportsperson: Natasha Sandalls Age: 15 Training: Natasha is captain of a woman's football club in Amersham. She also attends a lunchtime football club at school. Ability: Associative Identify the important skills/techniques and fitness components needed for participation in this position/role and explain why they are important. Firstly, I thought of all the important skills and techniques that Natasha would need to be able to know and perform in her position and role as captain of her team. * Good communication skills All players in any sports team need to be able to communicate well, one with another. This is because a team will be less successful without communication; when you communicate with team members everyone knows what to do and will be more confident in what they are doing. It is extremely important that Natasha has good communication as she is the captain of her team. Being the captain, Natasha has to lead the team and instruct or give advice to them while playing and training. One way Natasha can do this is by communicating with her fellow team mates. * Using space and having good awareness of space and your position A football pitch is very large in comparison to other sport's pitches and courts. A good footballer will use the large spaces available to create opportunities for the team to score a goal. Natasha, as a midfielder, is a position that can help conceive a goal. By having good awareness of space she can make good passes to the players upfront which could then could lead to their team gaining a goal. * Good team work Football is a team game. It is all about blending a variety of talents into an effective unit. A team that operates well together will perform at a much higher level than the skills of one player. ...read more.

Natasha shows good passing skills and passing is her strength which makes her particularly excellent in her position. Her accurate passes often lead to shots on goal; she can increase the team's success due to her passing skills. * Anticipation Top football players have good anticipation; they can read the ball. While watching Natasha's play she displays good anticipation. She reacts quickly to deflections, flick-ons and rebounds. As Natasha can react quickly and read the ball well, she can help to create chances of scoring goals. * Endurance (stamina) Natasha is highly motivated to win and she has high fitness endurance levels. This is good as she will need this motivation and endurance to play for the demanding length of a full football match (90 minutes or more- depending if there is a winner or on the type of competition). Natasha trains regularly to improve her cardiovascular endurance. Endurance is one of Natasha's strengths and her team's success benefits from her motivation and fitness to put full effort into the entire match. GCSE PE Coursework Section Three Identify and describe in detail the weakness of the player/participant and the effects these have on performance. Natasha is a very good footballer and leads her team into winning many games. She rarely makes major errors while performing important skills like tackling or passing. Natasha has good tactical awareness, timing and anticipation. Her work rate and effort is high as she is a dedicated, motivated, enthusiastic sportswoman. However, there are a few aspects of her game play that could improve to be even more successful: * Attacking Natasha plays a very defensive game. She prefers staying behind the other midfielders, so that the opposite team cannot easily get into their attacking half of the pitch. Defending is a good skill to have, however, to win you also need to have very good attacking skills. If Natasha does not improve her attacking skills, her team will not create as many opportunities to score. ...read more.

However, should the attacking team get a shot on target they receive the next service, or if they manage to score they receive the next two services. Equipment required: 1 half of a normal football pitch, two small goals, players, coloured bibs and a few balls Development: The coach can 'punish' teams who shoot inaccurately when not under pressure, or who fail to accept shooting chances, by giving the next service to the other team. The coach can impose one- or two-touch play to quicken shooting. Groups change around after a set period of time and scores are recorded. Training to improve Natasha's weaker: * Left foot (dribbling skills) Natasha is right footed, though in football you need to use both feet well in order to perform at a higher standard. A simple slalom drill will not only improve her left foot's accuracy, but will also increase her dribbling skills and speed. The Slalom runs are marked with poles or cones, in an area approximately 25X10 yards (see diagram). The squad is arranged in small groups behind the slalom, with the leading player having the ball. On the signal, the player proceeds to run and dribble the ball through the slalom, finishing with a straight speed run and placing his foot on the ball so that it is stationary for the next player. This continues until each member of the group has had a go. Any player who misses a pole or comes out of the zone must return to the last pole before re-starting his run. Equipment needed: 4 cones, players, lots of poles (or cones) to mark the slalom run, players and lots of balls Development: Perform varying techniques or 'tricks' on the ball with both feet Increase the number of runs Increase the difficulty of the slalom by adding more posts Give points to whichever group completes a set number of runs in the fastest time 1 Ashley Greenacre 10a GSCE PE C/W Miss Warnes ...read more.