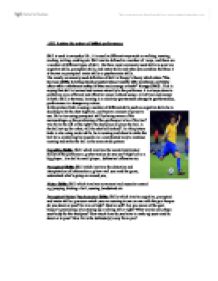 Analyse the nature of a skilled performer

AO1 Analyse the nature of skilled performance Skill is used in everyday life , it is used in different ways such as walking, running, reading, writing, cooking etc. Skill can be defined in a number of ways, and there are a number of different types of skill, the three most commonly used skills in sport are cognitive skills, perceptual skills, and motor skills and when you combine the three it is known as perceptual motor skills or psychomotor skills. The mostly commonly used definition of skill is Knapp's theory which states "the learned ability to bring about predetermined results with maximum certainty often with a minimum outlay of time and energy or both" Knapp (1963) .This is saying that skill is learned and comes naturally to the performer, it is always done to perfection in an efficient and effective manor without using a lot of time and energy or both. Skill is learned, learning is a relatively permanent change in performance, performance is a temporary action. In this picture Kaka is using a number of different skills such as cognitive skills he is deciding to hit the shot high/low, curl/swerve amount of power to use. ...read more.

It is almost correct to say that your quality of innate ability will determine your sporting success e.g if you do not possess speed and leg power you are not likely to excel in the long jump, but will better suited to compete in endurance based activities because When people watch a sporting activity they say " he/she has great ability" but that is incorrect because they are watching skill not ability. A good sportsman may have different groups of abilities, abilities do not predict sporting success . "Abilities can be essentially perceptual, essentially motor or a combination of both. Most abilities to do with action are a combination and are referred to as psychomotor abilities. Now there is no definitive list of psychomotor abilities." There are a number of definitions for ability here is a few that I have found: "Ability is a function of both inheritance and experience , though it may be developed and extended with use it is not learned. Abilities underpin the performance of skills"(Bull, 1994) "Stallings L M (1982 - Motor Learning from theory to Practice) ...read more.

These executive motor programmes are made up of sub-routines which are performed individually and also described as mini skills. As the novice performer begins to become an expert performer these mini skills are performed almost without any thought and the execution of the skill will become fluent and appear to be automatic every time it is performed. If the performance is at this level the skill is said to be grooved or overlearned. "for example a top level trampolinist can do a somersault automatically because the motor programme for that skill is stored in his/her long term memory. Due to it being well learned he does not require feedback about the skill therefore there is an open loop control. Closed loop control makes use of kinaesthetic feedback to tell the performer about slight adjustments which need to be made in order to make the skill successful. For example a child who is learning to balance in a headstand. Feedback is vital as a slight change of body position may cause imbalance and the skill becomes uncontrolled. In practice performers will be constantly moving from closed loop to open loop control to aid successful performances." www.sheffieldpeonline.co.uk Example of executive motor programme ...read more.