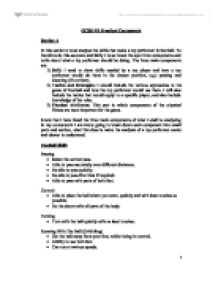 Analyse the skills that make a top performer in football.

GCSE PE Practical Coursework Section A In this section I must analyse the skills that make a top performer in football. To therefore do this accurate and fairly I must break the sport into components and write about what a top performer should be doing. The three main components are: 1) Skill: I need to show skills needed by a top player and how a top performer would do them in the chosen position, e.g.) passing and shooting (if a striker). 2) Tactics and Strategies: I should include the various approaches to the game of Football and how the top performer would use them. I will also include the tactics that would apply to a specific player, and also include knowledge of the rules. 3) Physical Attributes: This part is which components of the physical fitness are most important for the game. Know that I have listed the three main components of what I shall be analysing in my coursework I am know going to break down each component into small parts and section, what this does is make the analysis of a top performer easier and clearer to understand. Football Skills Passing * Select the correct pass. * Able to pass accurately over different distances. * Be able to pass quickly. * Be able to pass first time if required. * Able to pass with parts of both feet. Control * Able to place the ball where you want, quickly and with least touches as possible. * Do the above with all parts of the body. Turning * Turn with the ball quickly with as least touches. Running With The Ball (Dribbling) * Get the ball away from your feet, whilst being in control. * Ability to use both feet. * Can run at various speeds. * Beat players, whilst having the ball under control. * Have set strategies for beating an opponents (tricks). ...read more.

Turning * Can use some turning ability. * Will turn into available space. * Seems to turn into defenders to often. * Turn off the ball to slowly. * Will not take full control of the turn. Tactics and Strategies Strengths Weaknesses Overlap * Can play the overlap attack well, sometimes. * Controls the ball well on the receive. * Doesn't always hit the penetrating pass for the receiver. * Is to slow to look for the return of the ball. * Tends to turn back, once the overlap has been produced. Distributing the ball * Can accurately pass the 'square pass' through defenders. * Has trouble with lobbing defenders with the 'open space' pass. * Has huge trouble with accuracy, when looking at the piercing pass Creating passing angles * Can move to make space. * Often slow to find the available space. * Can find space that is accompanied by an opponent's defender. Chipping over defence * Can receive the ball when played over defence. * Doesn't select right player to receive the ball with the 'chip'. * Often chips the ball to short or long. * Doesn't know the correct time to use the pass. Playing as a striker * Can play this position, with some effect. * Doesn't have the pace to be the last line of attack. * Finds it hard to make his own openings on an attack. Playing as a forward * Plays this position to relative effect, well, and often. * Receives the ball well of the other player. * Cannot play as a target man, as he is hassled of the ball too much. * At times seems not to link up well with other forward. * Doesn't work along side the player, tends to drift away. Physical Attributes Strengths Weaknesses Cardiovascular endurance * Can last a game of football. * Can play a game, but his performance due to cardiovascular endurance decreases his performance. ...read more.

Then a shot is taken against a goalkeeper. This drill should take place just in front of the penalty box. Using this method of strength enhancement on the ball not only improves one player's ability to play as target man and hold up the ball, but also gives the other player the chance to touch and move then shoot. Holding ball whilst attacking: In this exercise a defender just outside the penalty spot marks a player. The player being marked has to gradually drag the ball back whilst pushing the defender marking him from behind as well. The eventually once reaching the penalty spot turn and shoot at goal. This exercise is brilliant to build confidence with the ball, whilst including the skill of turning and shooting, great for strikers. The 6-Week Training Programme Now that I have listed the drills and training schemes that I will use, I can now plot my 6-week training programme. It is important to realise that the exercises and drills will get progressively harder and that the same drill may be used. This is because this particular attribute may be weak and will therefore need more work on and focus. The weekly training sessions are once a week on a Monday, therefore they will be quick laborious, as I will try to fill the training session with as much of the drills as possible. Week: 1 Week: 2 Week: 3 Week: 4 Week: 5 Week: 6 Shooting Drills Simple Shooting Simple Shooting Counter '3 vs 2' Counter '3 vs 2' Standard '5 vs 4' Standard '5 vs 4' Dribbling Drills Dribbling into Space Dribbling into Space Dribbling through Cones Dribbling through Cones Zigzag cones Zigzag cones Tackling Drills Man in the Middle Man in the Middle Turnovers Turnovers Group Defending Group Defending Speed Drills Sprinting Chain Interval Sprints Interval Sprints Maximum Speed Acceleration Speed Acceleration Speed Strength Drills Holding Up The Ball Holding Up The Ball Holding Up The Ball Holding Up The Ball and Attacking Holding Up The Ball and Attacking Holding Up The Ball and Attacking 1 ...read more.