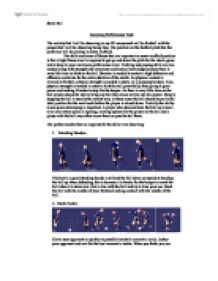 Analysing Performance Task The activity that I will be observing in my PE coursework will be football with the person that I will be observing being Dan. The position on the football pitch that the performer will be playing is centre midfield. The skills and areas of fitness that are important in centre midfield position is that a high fitness level is required to get up and down the pitch for the whole game and to keep to your maximum performance level. Tackling and passing skills are also needed along with strength and awareness and tactical knowledge because there is very little time to think on the ball. Stamina is needed to sustain a high defensive and offensive work rate for the entire duration of the match. As physical contact is allowed in football, physical strength is needed in duels, as in jumping headers. Also, physical strength is needed in order to kick the ball powerfully, thus giving it great power and making it harder to stop for the keeper. ...read more.

Get your non kicking foot beside the ball, use your arms for balance and keep your head still and eyes on your ball. Bring your kicking foot through and strike the middle of the ball. 4. Shooting Aim to drive the ball low with the instep of your foot. Follow through with your kicking leg and aim to get power and accuracy. Observation of the quality of skills in the game situation Skills Used in the game Very well Performed Quite well Performed Not well Performed Tackling 2 0 0 Passing 5 0 1 Shooting 2 0 2 Dribbling 3 2 1 Skills performed badly Why was skill performed badly? How can he improve performance? Shooting Not striking the ball cleanly in the middle of the ball. Work on striking the ball cleanly in middle of the ball keeping head down. Dribbling Letting the ball run away from him, not keeping ball under control. Work on keeping the ball under control dribbling through cones. ...read more.

This improves the stamina and turning quickness (Agility). To add excitement and prevent tedium you can have two people racing each other or teams racing. Or Have around 10 cones and put them going in a chris cross pattern so the player has to sprint to the first cone then 3/4 pace to the second then sprint to the 3rd cone and so on. This will improve speed, fitness (Stamina) and agility. Tackling Practise 1 on 1 and set up two small goals, two at each end about 10 metres apart and one player has to tackle the player with the ball and dribble it through the goal. Passing Stand opposite a wall with a ball and play the ball against the wall and collect the rebound and you can start with taking two touches and then you can move down to 1 touch and then use both feet. The other factors which I believe that could have affected the performance were that the weather was very cold and windy which affected the passing. Also the attitude wasn't there because it was a very small game playing against players of other standards so maybe it was too easy. Steve Ball ...read more.