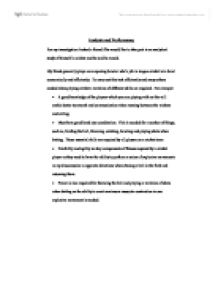 Analysis and Performance For my investigation I asked a friend if he would like to take part in an analytical study of himself in cricket and he said he would. My friend generally plays as an opening bowler who's job in league cricket is to bowl economically and efficiently. To carry out this task efficiently and many others needed when playing cricket a variation of different skills are required. For example: * A good knowledge of the players which you are playing with as this will enable better teamwork and communication when running between the wickets and calling. * Must have good hand eye coordination. This is needed for a number of things, such as, fielding the ball, throwing, catching, bowling and playing shots when batting. These essential skills are required by all players on a cricket team * Flexibility and agility are key components of fitness required by a cricket player as they need to have the ability to perform a series of explosive movements in rapid succession in opposite directions when chasing a ball in the field and returning them. ...read more.

The four aspects of his cricket which I chose to analyse are shown in the table below. Skill Strengths Weaknesses Batting Shows good movement of the feet when positioning himself for a shot. Leads with the head helping to get into the line of the ball. Is often too eager to play the shot resulting in bad timing and miss hits. Doesn't always follow through the shot. Bowling Keeps his eyes and head focused on the area he wishes to pitch the ball. Keeps his front arm straight. Short follow through down the wicket means some balls are lacking pace. Fielding Always walking in with the bowler so he can begin to chase the ball instantly if needed. In some cases uses the wrong hand for pick ups delaying the time in which the ball can be returned. Catching Picks up and watches the ball right into the hands. Cups the hands in the correct manner for a safe catch. Doesn't always give with the ball and bring it down into the chest. In some instances the ball may jump out. ...read more.