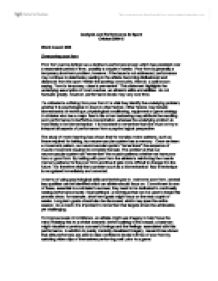 Analysis and Performance in Sport: Cricket 2004-5

Analysis and Performance in Sport Cricket 2004-5 Word Count: 906 Overcoming poor form Poor form can be defined as a decline in performance level which has persisted over a reasonable period of time, possibly a couple of weeks. Poor form is generally a temporary short-term problem, however, if the issue is not addressed, performance may continue to deteriorate, leading to the athlete becoming disillusioned and distanced from the sport. Within the sporting community, there is a well known saying; "form is temporary, class is permanent." This statement highlights the underlying assumption of most coaches, an athlete's skills and abilities do not fluctuate greatly, however, performance levels may vary over time. If a cricketer is suffering from poor form it is vital they identify the underlying problem; whether it is psychological or down to other factors. Other factors may include biomechanics or technique, physiological conditioning, equipment or game strategy. A cricketer who has a major flaw in his or her backswing may attribute the resulting poor performance to ineffective concentration, whereas the underlying problem is most likely to be biomechanical. ...read more.

Goal setting is a technique that can be used to break this process down, for example, short term goals might focus on the next couple of weeks. Long term goals should also be discussed, which may span the entire season. As a coach, it is important to remember that targets should be achievable, yet challenging. To improve levels of confidence, an athlete might use imagery to help focus the mind. Relating this to a cricket scenario, before walking to the crease, a batsman might visualise a previous successful innings and the feelings associated with this performance. In addition to purely mentally visualised imagery, research has shown that elite performers are able to raise confidence levels in times of poor form by watching video clips of themselves performing well prior to a game. Concentration is another psychological skill which is a vital element in all aspects of cricket, whether bowling, batting or fielding. This skill can be enhanced by a number of strategies. Most commonly used is self-talk. ...read more.

Performance profiling enables the person to pinpoint certain aspects of their game that might be the underlying cause of their poor form. The sport is broken up into four main sections: physiological factors, technical factors, tactical factors and psychological factors. Each one of these sections is broken down into subcomponents, for example, within physiological factors abilities such as stamina, pace, strength and flexibility are recognised. The athlete is asked to rate each of these subcomponents out of ten. It is therefore easy for the athlete and coaching staff to concentrate on areas of weakness. These areas of weakness might be the fundamental reasons behind the decline in performance. Various methods of overcoming a loss in form have been highlighted. The most important issue however is that the individual identifies there is a problem, and then pinpoints the area of weakness that can be attributed to the decline in performance. Only once this has been done, is it possible for the problem to be corrected. This is likely to be either done by the coach in a practice session if there is a physical problem, or by a sports psychologist if the athlete has a mental flaw. ?? ?? ?? ?? ...read more.