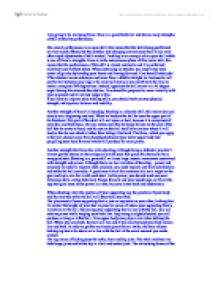 I am going to be analysing Kane. Kane is a good footballer and shows many strengths of skill within his performance. His overall performance is an open skill, this means that the skills being performed are very much affected by the unstable and changing environment there's also very often rapid adjustments of skill needed. Tackling is an example of an open skill which is one of Kane's strengths. Kane is in the autonomous phase of this motor skill, this means that the performance of this skill is almost automatic and it is performed relatively easy without stress. When containing an attacker you must lower your centre of gravity by bending your knees and leaning forward. You should back-pedal if the attacker moves sideways and never face a dribbler straight on, because he will put the ball between your legs or he may run by you as you won't have the time to make a complete 180-degree turn. Instead, approach the ball carrier at a 45-degree angle forcing him towards the sideline. You should be prepared to move laterally with your opponent and to not just lunge at him. If you want to improve your tackling skills, you should work on your physical strength, anticipation, balance and mobility. ...read more.

The first way to retrieve this is by recognition, this is if in a similar situation as before it will be recognised and then it can be reacted to in the same way. Also be relearning if she has already learned how to accurately pass with the non dominant foot however has forgotten how to do this, to relearn this can be much easier. Another way to get this information is by recall which is when he will have to actively search his memory store for certain previous learned skills. As Kane is doing this skill he would use it a lot within a game he will retrieve a lot of intrinsic and extrinsic feedback this will help to improve the skill. Using Welford's information's processing model we can see that firstly there is the display which is to do with the range of actions and things that are happening in the surrounding environment, secondly there is sensory information this would be exteroceptors these will receive information about what is going on outside the body, such as sound, whether there are people around etc, propriocetors which are nerve receptors in the body, in muscles and joints which will detect information regarding movements of muscles and joints and lastly interoceptors these will pass information about internal organs of the body. ...read more.

In the first week I would give him a bleep test and a coopers test to find out his aerobic capacity. You will need to use the different principles of training to progress the 12 week period. By week 6 of the programme he is expected to be able to run 35 minutes at least 3 times a week and by 12 weeks he should be expected to be able to run 45 minutes at least 5 times a week. There are many opportunities available to play football world wide. In England the Governing body is the F.A. Football is the most popular and most played sport. Although only males would used to play now women's football is very big across the world and in England. Around my area in Redbridge there are many chances to participate in football, there are local clubs all over the borough and places like Power League. There are many coaching courses and schemes all over England which allow ordinary people to gain more skill and higher qualifications then teach others and help them to progress even more. Football provides many different health and fitness benefits. Firstly it provides Agility, Co-Ordination, Power, Speed and reaction time Also good social and mental benefits , meet new people, stimulate competition , aesthetic appreciation and help to relieve stress. ...read more.