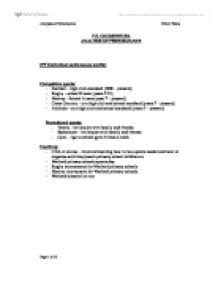 P.E. COURSEWORK ANALYSIS OF PERFORMANCE IPP (Individual performance profile) Competitive sports: - Football - high club standard [1996 - present] - Rugby - school B team [years 7-11] - Hockey - School A team [year 7 - present] - Cross Country - to a high club and school standard [years 7 - present] - Athletics - to a high club and school standard [years 7 - present] Recreational sports: - Tennis - for leisure with family and friends - Badminton - for leisure with family and friends - Gym - I go to school gym 3 times a week Coaching: - C.S.L.A course - involved learning how to be a sports leader and how to organise activities/coach primary school children at: - Watford primary schools sports day - Rugby tournaments for Watford primary schools - Hockey tournament for Watford primary schools - Watford schools fun run RULES AND REGULATIONS OF FOOTBALL: The basics - Each match involves two teams. The object is to score in the opposition's goal and avoid conceding goals. The team with the most goals at the end of the game wins the match. How many on each team? - 11 players on each side. How long does a match last? - A league match lasts 90 minutes (plus stoppage time). However, cup games with an equal score may go to extra time, where two 15 minutes halves will be played, and if the scores are still the same, 5 penalties are taken, the team with the most scored, wins, but if it is equal after the five penalties have been taken, it goes into sudden death. How many subs are allowed? ...read more.

Other popular formations involve 3-4-3; this is slightly more attacking mentality, with more threats going forward, however can be risky when defending. This formation is more suited when chasing a close game when a goal is needed to pull the scores level. A formation such as 5-4-1 is very defensive and is most popular when leading in a very close game, and avoiding conceding which would change the whole aspect of the game. The only problem with this formation is that it offers very little attacking options, so unless the lone striker is strong and quick, he is going to find it very hard to get in the game. 'Attacking from the front' is therefore not usually very successful with this formation. Other tactics involved in game play are mentioned in the table: Other tactics involved. When winning comfortably When winning by one goal in a close game When drawing When losing Creative Freedom Usually much freedom and team trying new skills and techniques None or little to avoid conceding Sometimes when in control of the game, but never too much to avoid upset Usually not unless it is effective Time Wasting Depends if the team is tired or wants more goals High Average depending on team is content with draw Very little Tempo Fast or slow, can be dictated by team As slow as possible without being ineffective Average Fast Width Depends on teams formation Depends on teams formation Depends on teams formation Depends on teams formation Closing down Rarely Very often Often Often Defensive Line Usually pushed up Deep Average Push up on the break and deep when defending Marking Zoned marking Man Marking by doubling up Varies Zoned/Man marking Target Man Supply Depends on target mans abilities Depends on target mans ...read more.

- Once the ball is down, he puts all distractions out of his head, selecting the relevant inputs into order due to 'channel capacity' (the amount of information which can be held in the brain in the short term, usually about 7-10 pieces), i.e. the position of the wall, and the speed and direction of wind, whilst discarding irrelevant inputs such as the opposition fans trying to distract him. - He then steps back 3 or 4 paces, so he can stride into the shot with speed, but not too much speed as this would lose control of the shot. Whilst doing this his mind is focused totally the free kick, and is mentally picturing how he is going to hit the ball, this is known as mental rehearsal. - He then begins his run up whilst keeping his eye on the ball, as he steps in to kick it; he places his left foot beside the ball pointing in the direction towards the goal, as he extends his right foot from behind and follows through with his foot to obtain maximum power. - Usually this procedure pays off by scoring a goal. - A famous example is when he scored against Greece in the World Cup Qualifiers in 2002. In the last minute of the game, he scored a magnificent free kick to make England draw 2-2, so they got through to the world cup. - If he hadn't have scored we wouldn't have got to the finals. This added pressure to the moment, and showed his true class, as performing well under pressure is an important part of succeeding to be a perfect model. ?? ?? ?? ?? Analysis of Performance Oliver Wells Page 1 of 13 ...read more.