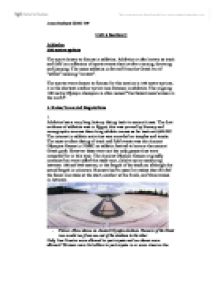 Unit 2 Section C Athletics 100 metre sprints The sport chosen to discuss is athletics. Athletics or also known as track and field is a collection of sports events that involve running, throwing and jumping. The name athletics is derived from the Greek word "athlos" meaning "contest". The sports event chosen to discuss for this section is 100 metre sprints, it is the shortest outdoor sprint race distance in athletics. The reigning 100 metre Olympic champion is often named "the fastest man/woman in the world". 1. Rules/Laws and Regulations 1. Athletics has a very long history dating back to ancient times. The first evidence of athletics was in Egypt; this was proved by literary and iconographic sources describing athletic scenes as far back as 3,000 BC. The interest in athletic activities was recorded on temples and tombs. The most evident dating of track and field events was the Ancient Olympics Games in 776BC an athletic festival to honour the ancient Greek gods. However these were not the only games that were competed for in this time. The Ancient Olympic Games originally contained an event called the stade race, a short sprint measuring between 180 and 240 metres, or the length of the stadium although the actual length is unknown. Runners had to pass five stakes that divided the lanes: one stake at the start, another at the finish, and three stakes in-between. - Picture Above shows an Ancient Olympic stadium. Runners of the Stade race would run from one end of the stadium to the other. Only free Greeks were allowed to participate and no slaves were allowed. Women were forbidden to participate in or even observe the games, on pain of death, by being thrown of a cliff, the reason for this was because it was thought to dishonour the god Zeus who was male. Although Women did have their own games in honour of the god Hera (female god) ...read more.

till the beginning of the first observable limb movement. - Start The start requires the body to overcome inertia, thereby initiating movement. Three basic laws of physics explain how the body can initiate movement. Newton's first law states that a body at rest will remain at rest unless some force induces a change in the resting state. The start stage requires a combination of explosive muscle contractions which leads to a production of great force. Newton's second law states that the production of force is a combination of the athlete's body mass and acceleration. Once the force into the blocks has been created, the blocks produce a subsequent reaction, which propels the body forward from the starting blocks. This occurs due to the premise of Newton's third law - for every action there is an equal and opposite reaction. - Drive Phase 0-15m the drive stage involves the first step out of the blocks and this continues for a further two to eight steps, each consecutive step increases in length and the athlete's body starts in a low forward lean position and starts to straighten with each step. It is called the drive stage because the focus is to drive as much force as possible into the ground to produce a transfer of energy from the ground back through the athlete. This leads to an increase in speed of the athlete's movement. - Initial Acceleration 10m-30m the athlete is driving forward and moving their body at as fast as they can. The athlete's steps continue to increase and the forward lean of the body starts to straighten even further. The athlete is still driving there arms and legs hard and fast in order to achieve great speed and increase stride frequency. - Full Acceleration 25-50m the body is still increasing speed, but the hips are starting to straighten and the knees are coming under the hips. ...read more.

It has been chosen to discuss the start phase/drive phase routine of the 100 meter sprints in context of a perfect model. The start phase of the 100 meter sprint race is the 5th phase out of the 10 explained earlier in this text. The phase after this is the drive phase. These phases combined together are very important for an athlete to achieve a good time, and are the exploding out of the blocks part which is a fundamental skill that must be mastered by a 100 meter athlete. The athlete is already positioned in the starting blocks, and has reacted to the stimuli of the starting gun; the neural stimulus of the brain has reached the muscle fibres. The beginning of the first observable limb movement is the beginning of the, start stage. This part is when an athlete explosively pushes out of the starting blocks with both legs. The front leg should extend remaining in contact with the ground while the back leg swings forward. The extended front leg and trunk form a straight line. Arms should swing opposite to the legs, elbows flex at 90o and the palms flat swinging towards the forehead. - Asafa Powell, a perfect model? The core skills for a textbook perfect model for the 100 meter sprints are Stability, Power & Stamina. Keele (1968) defined a motor programme as being a set of muscle commands that allow movement to be formed without any peripheral feedback, according to Keele, the person sees a movement and stores model of the task in the brain. When a 100 meter athlete practices a skill, they will constantly compare the outcome and nature of the movement with the model. As with 100 meter sprinting further motor programmes can come together to form executive motor programmes. An example of such a motor programme in 100 meter sprinting is the skill of exploding out of the blocks. ...read more.