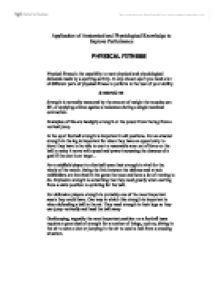 Application of anatomical and physiological knowledge to improve performance.

Application of Anatomical and Physiological Knowledge to Improve Performance PHYSICAL FITNESS Physical fitness is the capability to meet physical and physiological demands made by a sporting activity. In any chosen sport you need a lot of different parts of physical fitness to perform to the best of your ability. STRENGTH Strength is normally measured by the amount of weight the muscles can lift, or applying a force against a resistance during a single maximal contraction. Examples of this are handgrip strength or the power from the leg from a vertical jump. In the sport football strength is important in all positions. For an attacker strength in the leg is important for when they have an opportunity to shoot they have to be able to exert a reasonable amount of force on the ball to make it move with speed and power increasing the chances of a goal if the shot is on target.. For a midfield player in a football team their strength is vital for the whole of the match. Being the link between the defence and attack midfielders are involved in the game the most and have a lot of running to do. Explosive strength is something that they need greatly when starting from a static position to sprinting for the ball. For defensive players strength is probably one of the most important assets they could have. One way in which this strength is important is when defending a ball in the air. They need strength in their legs so they can jump vertically and head the ball away Goalkeeping, arguably the most important position on a football team requires a great deal of strength for a number of things, such as, diving in the air to save a shot or jumping in the air to catch a ball from a crossing situation. Methods of improving strength can vary, weight training is an effective way of building up muscle strength increasing the capabilities of the body. ...read more.

Warm-up Game: Soccer Shark - 15 minutes Setup: Place disc cones in a 20-yard diameter circle. All players except 1 have a ball. Remaining player is the "shark", wearing a different colored vest. Players dribble around inside of cone circle. On the coach's signal, the shark enters the circle and attempts to dispossess the dribblers and kick their ball out of the circle. Players who have their ball kicked out of the circle must dribble around the outside of the circle, changing direction each time another player's ball is kicked out. Instruct that players dribbling around the outside must watch for balls being kicked out and shout "CHANGE!" The last to maintain possession inside the circle is the shark for the next round. Stretch for 1-2 minutes every 5 mins. 1st Skill Building Exercise: "200 Touches" - 10 minutes Setup: Every player has a ball across a line; beyond fingertip touch apart, all facing the same way. Players perform these ten ball control moves, 20 repetitions for each. 1. Face forward, dribble forward with front/top of foot. 2. Face side, dribble (sideways) with outside of foot. 3. Face back, tap ball behind with heel, turn forward & stop by putting opposite foot on top of ball, face back. 4. Face forward, dribble forward with front/top of foot, stop ball suddenly by putting same foot on top of ball. 5. Face side, push ball with inside of back foot, stop ball with inside of front foot. 6. Face back, foot on top of ball roll ball straight behind, turn with ball, stop with opposite foot, face back, repeat 7. Face forward, dribble forward with front/top of foot, step to the side with dribbling foot and "fake" with body, step other direction with opposite foot and "fake" again with body. 8. Face side, back foot on top of ball, roll ball across body & step down (cross-over), step with other foot, stop ball with back foot. ...read more.

This is an effective way of doping control and testing, as there are not many ways in which you can avoid this sort of test, or any of the others for that matter. Residue testing involves the footballer giving an item of theirs to the drug analyst that may have residue from the footballers body on it, this could include a drinking flask, mug etc. that may have the persons saliva on it, or a towel that may have hair on it that could be analysed, i.e. anything that may have any residue on it that could be analysed in order to prove the existence of drugs or doping. Here is an example of how the FA intends to deal with the increase in drug abuse in football; The FA is conducting random drug testing of gifted footballers as young as nine years old. These unannounced spot-checks on 9-16 year olds is being carried out at 147 centres of excellence across England and Wales. However, each of these drug tests costs the FA �230. UefA One of the main football governing bodies is UEFA. The Union of European Football Associations governs football all over Europe and makes sure the rules that are formed by this organisation are enforced and abided by, as well as organising competitions and so on. Moreover, as I live in Wales I will talk about the Football Association of Wales or FAW. The FAW are more of a regional organisation that relay rules etc. from UEFA and make sure that there are competitions, and matches taking place all over Wales, as well as distributing limited funds to grass roots schemes and to various clubs in the region. The FAW are based in Cardiff, the capitol, of Wales, which is, in itself relevant as it means that it is easily located. Here are some details I obtained from UEFA.com: President Address Desmond W. Shanklin. Plymouth Chambers, 3 Westgate General Secretary Street GB - David George Collins. Cardiff CF10 1DP Head Coach Telephone Leslie Mark Hughes. +44 29 2037 2325 Press Officer Fax David George Collins. +44 29 2034 3961 ...read more.