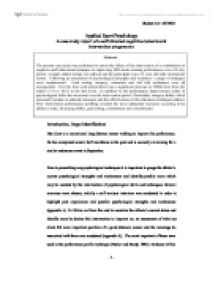 Applied Sport Psychology A case study report of a self directed cognitive-behavioural intervention programme Introduction, Target identification My client is a recreational long distance runner wishing to improve his performance. He has completed several half marathons in the past and is currently in training for a similar endurance event in September. Prior to prescribing any psychological techniques it is important to gauge the athlete's current psychological strengths and weaknesses and identify possible areas which may be assisted by the intervention of psychological skills and techniques. Several exercises were chosen; initially a self analysis interview was conducted in order to highlight past experiences and possible psychological strengths and weaknesses (appendix a). To follow on from this and to ascertain the athlete's current status and identify areas he desires this intervention to improve on, an assessment of what my client felt were important qualities of a good distance runner and the meanings he associated with them was conducted (appendix b). The most important of these were used in the performance profile technique (Butler and Hardy, 1992). Evidence of this is shown in appendix c. The performance profile technique was also used as an evaluative tool to assess and measure possible improvements post-intervention along the sub-scales identified by the athlete. As a bench mark for the performance profile my client rated himself on the qualities identified on a one to ten scale to what my client envisaged as his ideal performance state. ...read more.

From the initial self analysis interview one of his most positive experiences was the finish of the Nottingham Half Marathon which he competed it last September. Before each of the longer runs scheduled in his training he was instructed to recreate that positive situation using all of his senses. This imagery script is presented in appendix J, 1. In order to assess any improvement with my client's imagery ability over the intervention period a weekly evaluation was conducted (appendix K). This consisted of a-g subscales measuring his ability to incorporate all his senses, mood, internal and external imagery ability and controllability of the image. These were ranked on a 1- 5 scale (1= no image present to 5=extremely clear image) and a weekly score was calculated through a summation of his subscale ratings. Use of relaxation techniques The performance profile identified a low ability to relax and reduce anxiety at key moments. The ability to consciously regulate his responses to certain situations and maintain an optimum level of performance is essential. Through greater awareness of the athlete to learn and identify which mental-emotional and bodily states and feelings accompany superior performances he will be better able to re-enact that state for subsequent performances. To improve my clients skill in this domain Progressive Relaxation (P.R) ...read more.

This uncertainty may have been reduced through the use of a control which only participated in the physical training and none of the psychological methods. Although still this does not account for the possible inter-individual differences which are often present in responses to the same psychological interventions. Ideally several more baseline measures would have revealed any initial physiological improvements or improvements due to greater familiarisation with the event. Ideally only when the baseline measures levelled should the psychological intervention been initiated. This is crucial in determining whether changes that occurred between the baseline and intervention are caused by the actual intervention or would have occurred regardless. The problem with implementing a package of psychological skills masked which may be having the desired effect and which are ineffective or possible counter productive. It also maybe the case that some of the skills implemented work best in certain combinations and are mutually supportive i.e. goal setting and imagery. In order to ascertain this information a group of individuals would have been needed and interventions with single elements and combinations are necessary to assess their effectiveness. The use of such group studies does not come without several complications. The single subject design utilised in this study eliminates the potential disadvantage of average affect measures of a group, whereby some may increase; others decrease, while some stay indifferent. Although statistical significant improvements may have occurred in individuals, the average is masked by the group data. ...read more.