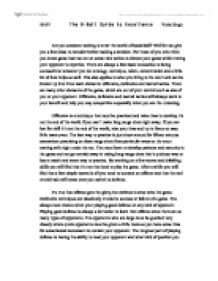 Are you someone waiting to enter the world of basketball?

Are you someone waiting to enter the world of basketball? Well let me give you a few ideas to consider before making a decision. For those of you who think you know game hear me out on some nice tactics to elevate your game while ruining your opponent's expertise. There are always a few basic necessities to being successful at whatever you do: strategy, technique, talent, concentration and a little bit of luck helps as well. This also applies to what you bring to the court and can be broken up into three main elements: offensive, defensive and mental tactics. There are many other elements of the game, which are out of your control such as size of you or your opponent. Offensive, defensive and mental tactics will always work to your benefit and help you stay competitive especially when you are the underdog. ...read more.

Defensive techniques are absolutely crucial to success or failure of a game. You always have chance when your playing good defense on any kind of opponent. Playing good defense is always a lot harder to learn then offence since there are so many types of opponents. The opponents who are large must be guarded very closely where quick opponents must be given a little room so you have some time for some lateral movement to contain your opponent. The toughest part of playing defense is having the ability to read your opponent and what kind of position you must play him. Defense can only be taught by playing with others. The tougher the opponent is to defend the better it is to learn from. People often make the biggest mistake in the beginning of the game by going easy on their opponent then later find themselves trying to stay alive at the end of the game with first-class defense. ...read more.

The other part of the mental game, which best works on defense, is patience. Never force an uncomfortable shot for any reason other than a shot clock winding down, especially not for a trash talker. Respect the time and use it to get a good shot. By using the trash talking method and slow and steady shot method you heavily increase your chances of staying competitive. The game can sometimes cheat you out of win cause of a little luck, but it can also save you. I lost a few games cause of it, but you can't leaves games to chance and have to take control with the fundamentals of offence, defense, and the mental elements. Just remember every time you step onto the court bring it all floor and don't leave anything behind. So are you going to step up and step onto the court? ?? ?? ?? ?? 5/1/07 The B-Ball Guide to Excellence Vishal Singh ...read more.