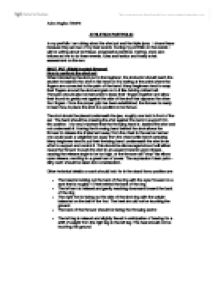 ATHLETICS PORTFOLIO In my portfolio I am doing about the shot put and the triple jump. I chose these because they are two of my best events. During my portfolio on the events I will be writing about technique, progressive practices, training, stars who influenced me to do these events, rules and tactics and finally a risk assessment on the two. SHOT PUT (Right handed thrower) How to perform the shot put When introducing the shot put to the beginner, the instructor should teach the student to balance the shot in his hand so it is resting at the point where the fingers are connected to the palm of the hand. Many beginners tend to wrap their fingers around the shot and grab on to it like holding cricket ball. Throwers should also be instructed to keep their fingers together and allow their thumb to gently rest against the side of the shot that opposes the other four fingers. Once the proper grip has been established, the thrower is ready to learn how to place the shot in a position to be thrown. The shot should be placed underneath the jaw, roughly one inch in front of the ear. The hand should be pressing the shot against the neck to support it in this position. It is very important that the throwing hand is behind the shot and not underneath it. Having the throwing hand behind the shot allows the thrower to release the implement away from the chest in the same manner one would push a weighted bar away from the chest while bench pressing. Many beginners tend to put their throwing hand underneath the shot in an effort to support and control it. This should be discouraged since it will either cause the thrower to push the shot in an upward manner upon release, causing the release angle to be too high, or the thrower will "drop" his elbow upon release, resulting in a great loss of power. ...read more.

The take-off foot should be the athlete's strongest leg due to the fact it will be used for the Hop and the Step, or determined by the athlete's preference. The jumper should concentrate on an even rhythm for each landing. The foot strike of the Hop and Step should be flat or full-footed, with the landing leg knee bent slightly in preparation for take-off. Break the jump into its component phases. Teach the hop phase by having the athlete do a walking one-legged hop several times, then incorporate the circling action of the hop leg. Follow this with multiple one-legged hops with a circling leg, flat landing, and upright posture. After learning the Hop, move onto the Step and Jump phases. Consecutive bounds duplicate the step and jump actions. The jumper should do these with a double-arm action and land full-footed. The desired distance of each bound should be the Hop 35%, the Step 30%, and the Jump 35% of the total jump. Next combine the three phases of the jump. Start with Hop and Step combinations on grass. Stress carrying momentum from the Hop into the Step. Finally, add the Jump phase. Again, emphasize carrying momentum from one phase to the next with an even rhythm for each phase. While learning the event, stress the desired percentages in each phase of the jump. Once the jump phases have been put together, slowly add steps to the run-up in accordance with the athlete's ability to control his speed properly. The approach run for the Triple Jump is similar to that of the Long Jump. The purpose of both run-ups is to create the greatest amount of speed that can be controlled for that jump. Lack of strength and technique skills will reduce the distance and the amount of speed that can be carried successfully into the jump. The major difference in the triple jump approach is the transition into the jump. ...read more.

Driving the arms and leg provides the needed vertical impulse off the ground without attempting to jump upward. After the arms have blocked, they are then pulled behind the body in preparation for the Step phase. When using double-arm method, the coach must make sure the athlete is not loading up before the first phase by cocking both arms back at take-off. Loading only decreases the crucial horizontal velocity. Foot Strike Through the Three Phases The transition from Hop to Step, and Step to jump is of utmost importance in maintaining the greatest velocity during each phase of the Triple Jump. This active landing, referred to as pawing, is similar to the foot strike of a tiger, reaching out, grabbing the ground and pulling it towards him. In an active landing the athlete's leg is extended, the ankle flexed and the entire lever pulled down forcefully striking the ground mid-foot. Upon contact the body rolls forward over the foot onto the toes while pushing off the ground. If the athlete lands stiffly on the heel, a braking action occurs, decreasing velocity and distance, and increasing the chance of injury. Rules and tactics Two rules in the triple jump are that you should always jump from either on or behind the boards and exit through the end of the pit, not the sides. When in a Triple jump put competition you may choose to put all your effort into your first jump to get an early lead, or hold back and give a false impression to those you are competing against and put all your effort into a final jump at the end, you may also go flat out for every jump. Risk assessment Major risks when doing triple jump in school are implements in the sand pit. This can range from excrement to bits of plastic or glass from dropped litter. It is vial that before performing the jump you check that this is clear. The correct footwear (with laces tied) should also be worn. Adam Hughes 10MPB ...read more.