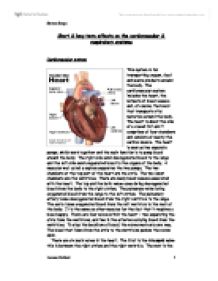 Short & long term effects on the cardiovascular & respiratory systems Cardiovascular system This system is for transporting oxygen, food and waste products around the body. The cardiovascular system includes the heart, the network of blood vessels and, of course, the blood that transports vital materials around the body. The heart is about the size of a closed fist and it comprises of four chambers and consists of mostly the cardiac muscle. The heart is seen as two separate pumps, which work together and the main function is to pump blood around the body. The right side send deoxygenated blood to the lungs and the left side send oxygenated blood to the organs of the body. A muscular wall called a septum separates the two pumps. The two chambers at the top part of the heart are the atria. The two lower chambers are the ventricles. There are many blood vessels associated with the heart. The top and the both venae cavae bring deoxygenated blood from the body to the right atrium. The pulmonary veins bring oxygenated blood from the lungs to the left atrium. The pulmonary artery takes deoxygenated blood from the right ventricle to the lungs. The aorta takes oxygenated blood from the left ventricle to the rest of the body. It is the same as other muscles for the fact that it requires a blood supply. There are four valves within the heart - two separating the atria from the ventricles, and two in the arteries carrying blood from the ventricles. To stop the backflow of blood, the valves work only one way. The blood that flows from the atria to the ventricles pushes the valves open. There are six main valves in the heart. The first is the tricuspid valve this is between the right atrium and the right ventricle. The next is the bicuspid valve and this lies between the left atrium and the left ventricle. ...read more.

If you do all these types of training your muscles will get bigger and stronger and you will get quicker and will be less likely to get injured as well. Biological adaptations are a long-term process and most of the adaptations mentioned take months or years to establish completely. Once established, these adaptations promote greater general and specific fitness, which will remain with the performer even if exercise stops. As an anaerobic performer if you train for a long time and get very strong and very quick and powerful and then just stop most adaptations would return to the untrained state but again this would be a long-term process. Conversely, although intense daily training can increase performance dramatically over a short period of time, there are no biological adaptations, which would maintain fitness though once exercise had stopped. Increased flexibility also is a big advantage because it means the performer can perform short bursts off high energy and high-pressured movements whilst having a less chance of getting injured. They will also be able to make movements that they may not of been able to make and this will help them with their performance and well as making them more flexible it will also improve their speed and their injury prevention. So to conclude the anaerobic and aerobic systems are both extremely different and have completely different adaptations when they are trained for a long time. The anaerobic is all about power and all about doing things in a short space of time using up a lot of energy where as on the other hand aerobic is using a lot of energy over a long period of time and doing things a lot less powerfully and under less pressure. When performing at the top level of you sport both of these are as hard as each other because both ask different physical requirements and sometimes both, even though they are completely contrasting, can have the exact same outcome on the performers body. ?? ?? ?? ?? Steven Snape Leanne Holbert 1 ...read more.