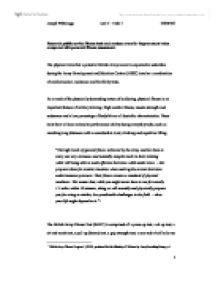 Research public service fitness tests and analyse areas for improvement when compared with personal fitness assessment. The physical trials that a potential British Army recruit is expected to undertake during the Army Development and Selection Centre (ADSC) involve a combination of cardiovascular, resistance and flexibility tests. As a result of the physically demanding nature of soldiering, physical fitness is an important feature of military training. High aerobic fitness, muscle strength and endurance and a low percentage of body fat are all desirable characteristics. These traits have all been related to performance ability during everyday tasks, such as marching long distances with a considerable load, climbing and repetitive lifting. "The high levels of general fitness achieved by the Army enables them to carry out very strenuous and mentally complex tasks in their training while still being able to make effective decisions while under stress - this prepares them for combat situations when making the correct decisions under immense pressure. Their fitness creates a standard of physical readiness. This means that, while you might never have to run for exactly 1.5 miles within 10 minutes, doing so will mentally and physically prepare you for rising to similar, less predictable challenges in the field - when your life might depend on it."1 The British Army Fitness Test (BAFT) is comprised of: a press-up test, a sit-up test, a sit-and-reach test, a pull-up (heave) test, a grip strength test, a one-and-a-half mile run test and a multi stage fitness test (beep test). In addition to this a candidate must fall within specific body fat standards. ...read more.

The run must be completed in no more than ten minutes and thirty seconds. Lung function tests are of little value for predicting fitness and exercise performance and so the peak flow test is not acknowledged with great reverence in the public services. Nevertheless, good lung function is important for optimum health-related fitness. The peak flow test requires the participant to take a deep breath and breathe out as hard and as fast as possible into the peak flow meter. The value recorded is peak expiratory flow, in litres per minute. An average reading for young males is said to be between six-hundred and eight-hundred millilitres thus my reading of six-hundred-and-thirty falls within the average. Alarmingly though the average of my fellow students' performance was five-hundred and fifty. Improvements on this may be made on the subsequent test by increasing the intake of breath and the speed and force that we exhale. A recent physical fitness program involving all of the areas of the BAFT was put into place for both myself and my fellow students to participate in. The test, that will be taken every six weeks, was developed to assess my current abilities in each of the major areas of fitness and to chart my progress. In order to measure my progress I have kept a record of my performance in each component of the fitness test. Although it is nigh on impossible to replicate the exact conditions of the previous test, i.e. ...read more.

I do not have to be able to lift heavy weights in order to pass the ADSC fitness test. Another substitution that can be made is instead of running I would swim or row which, apart from maintaining my cardio-vascular fitness, will work upper body muscle groups, amongst others, that running alone does not focus on. "The components of fitness do not exist in isolation, as the development of one will influence the development of another."6 Regardless of my shortfall in the strength and endurance area I was rather pleased with my overall performance and only just fell short of the Army entry requirements in the press-ups test by ten, the beep test by 0.6 and the grip test by 4kg. My time of 10:07 for the 1.5 mile run would make the grade for the Army fitness test and also beats the average of my fellow students' time of 11:1 by almost a minute. My BMI of 21.3 falls within the required score and my body fat percentage of 14.2% is well below the class average of 18.3%. Also my sit and reach score of 46cm far surpasses both the Army's requirements and the average class score of 33cm. The test, while it cannot provide me with an exact measure of my physical status, has given me a good indication of my present level of fitness. It shows the level that I am at now and will continue to show me how I progress over the coming months. Most importantly it will help me to identify my strengths and to work on my areas of weakness in order that I will be thoroughly prepared to commence the Army fitness test. ...read more.