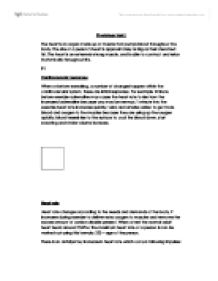 Cardiovascular responses When or before exercising, a number of changes happen within the cardiovascular system, these are initial responses.

Physiology task1 The heart is an organ made up of muscle that pumps blood throughout the body. The size of a person's heart is approximately as big as their clenched fist. The heart is an extremely strong muscle, and is able to contract and relax rhythmically throughout life. P1 Cardiovascular responses When or before exercising, a number of changes happen within the cardiovascular system, these are initial responses. For example 1minute before exercise adrenaline may cause the heart rate to rise from the increased adrenaline because you may be nervous. 1 minute into the exercise heart rate increases quickly, veins and arteries widen to get more blood and oxygen to the muscles because they are using up the oxygen quickly, blood vessels rise to the surface to cool the blood down, start sweating and stroke volume increase. Heart rate Heart rate changes according to the needs and demands of the body. It increases during exercise to deliver extra oxygen to muscles and removes the excess amount of carbon dioxide present. When at rest the normal adult heart beats around 75BPM. The maximum heart rate of a person is can be worked out using this formula: 220 - age of the person. There is an anticipatory increase in heart rate which occurs following impulses coming from the brains command system. This happens not only during exercise but also during the period of time before athletes are about to exercise. ...read more.

Therefore exercise increases demands on the respiratory and circulatory system. If either of these systems fails to meet the demands set by the body the athlete will feel out of breath. This is generally due to the heart not being able to move enough blood the muscles and lungs, and not the inability of the respiratory system to provide enough oxygen. Intercostal muscles During the breathing process, the intercostal muscles contract, causing the ribs and the sternum to move upwards and outwards. While this process takes place, the diaphragm muscles contract, causing the diaphragm to move down so the diaphragm can effectively flatten. The combined movements of the ribs, sternum and diaphragm cause the lungs to increase in volume, while the air pressure within the lungs decreases s below the outside air pressure. The result is that the outside air pressure forces air from the outside environment into the lungs. During exercise forced breathing is used. This differs from normal breathing because the internal intercostals muscles contract, moving the ribs and sternum up and outwards more forcibly. In exercise and performance, the strength and efficiency of the intecostal muscles are increased because of the work they have to do. Tidal volume Tidal volume is the volume of air inhaled and exhaled in one breath. Exercise results in an increase in tidal volume over 1 minute (minute ventilation). ...read more.

molecule and a phosphate. When a molecule of ATP is combined with water, the last phosphate group splits off and energy is released. Creatine phosphate system ATP and creatine phosphate (or PCr) make up the ATP-PCr system. PCr is broken down releasing a phosphate and energy, which is then used to rebuild ATP. The ATP-PCr system can operate with or without oxygen, and is said to be anaerobic. During the first five seconds of exercise the ATP-CPr system is relied on. ATP lasts only a few seconds, then PCr buffering the drop in ATP for another 5-8 seconds or so. The ATP-PCr system can sustain all out exercise for 3-15 seconds and during this time power output is at its greatest, so it would be used in weightlifting. Lactic acid system Glycolysis is the breakdown of glucose and is made up of a series of enzymatic reactions. The carbohydrates we eat supply the body with glucose, which can be stored as glycogen in the muscles and liver. The end product of gycolysis is pyruvic acid. The lactic acid system kicks in after ATP-PCr system and last roughly between 55-90 seconds. It is used in high intensity exercise such as a 400m race. Anaerobic glycolysis Anaerobic glycolysis is the process by which the normal pathway of glycolysis is routed to produce lactic acid. It happens at times when energy is required in the absence of qxygen. It is vital for tissues with high energy needs, insufficient oxygen supply or in the absence of oxidative enzymes. ...read more.