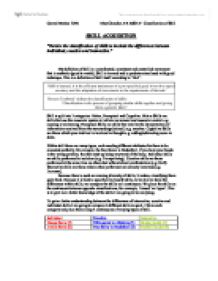 SKILL ACQUISITION "Review the classification of skills to include the differences between individual, coactive and interactive." My definition of skill is a coordinated, consistent and controlled movement that is aesthetic (good to watch). Skill is learned and is predetermined used with good technique. This is a definition of skill itself according to 'Bull': 'Skill is learned; it is the efficient attainment of a pre-specified goal; it involves speed, accuracy and the adaptation of movements to the requirements of the task.' 'Roscoe Textbook' defines the classification of skills: 'Classification is the process of grouping similar skills together and giving them a generic label.' Skill is split into 3 categories: Motor, Perceptual and Cognitive. Motor Skills are skills that use the muscular system to initiate movement and muscular control e.g. running or swimming. Perceptual Skills are skills that involve the interpretation of information received from the surroundings (stimuli) e.g. snooker. Cognitive Skills are those which your intellect is involved in thought e.g. adding/subtracting score in darts. Within skill there are many types, each needing different attributes for them to be executed perfectly, for example, the free throw in Basketball, if you have your hands in the wrong position, the shot ends up being wayward of the hoop. ...read more.

It also helps that I know from personal experience what is involved in each skill and type of sport. It seems individual skills are predominantly 'self paced' and 'closed'. This makes sense as by definition individual skills are those in which no direct opposition is involved with the performer making it hard for a third party to affect the skill. The only exception is when the environment affects the skill, for example in a high jump competition, there maybe a huge crowd or a family member watching, which may affect the performer psychologically. It is similar with playing a sport involving the weather for example, kicking a penalty in rugby would be very hard to control if there is a powerful headwind. It seems that also lots of individual skills are discrete with a clear beginning and end and the skill can be repeated. However, there are anomalies too. For example, canoeing is an individual sport but the skill is continuous and can be stopped whenever the performer wishes. I think there are anomalies because the majority of individual skills are those with an objective for example, in the high jump you're objective is to get over the bar, that's all, there are no other components involved. ...read more.

The hockey gridlock for example, if two performers were to go into a tackle, the force you would be putting in would be internal but the force working against you would be external. So if you won the tackle, you would say that the tackle was more internally paced than externally. When trying to evaluate whether interactive skills are discrete or continuous. I feel some aspects of interactive sports are discrete, for example, the penalty kick in Rugby. But I also feel that some aspects of interactive sports are continuous, for example, running in Rugby. So I think it is fair to say that interactive sports cannot be generalised into these two categories. This is most likely due to the diversity within this type of skill. To conclude, to classify skills, we group skills together so we can tell them apart by placing these skills on a continuum. Within the classification system there are four main continuums - muscle involvement, the affect of the environment, the pacing of the skill and the way in which the skill is carried out. By using this method we identify differences by looking at trends and patterns. Each continuum offers different information which is used by coaches and performers alike because it gives a thorough understanding of skills and relationships between them. ...read more.