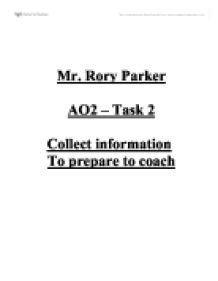 Collect information to prepare to coach

Mr. Rory Parker AO2 - Task 2 Collect information To prepare to coach Rugby Modern rugby requires you to have speed, strength, skill, endurance, strategy and power in order to excel. Rugby demands such diverse physical attributes. Stamina It is referred as cardio respiratory endurance, efficiently of the heart, lungs and circulation. Physical or mental strength to continuing to do something over a long period of time. It is essential in recovery and replenishment of energy to resist power to endure disease, fatigue, privation, etc. WHY: Stamina work is something that most players love to hate and finding an effective way to develop stamina. Stamina B Strength Strength refers to the capacity of the muscles to exert force. Necessary in applying speed and power during high intensity sports where burst of power are needed many times during the activity. The classifications of strength are: * Maximum strength - the greatest force that is possible in a single maximum contraction * Elastic strength - the ability to overcome a resistance with a fast contraction * Strength endurance - the ability to express force many times over Changes that will occur within the muscle due to strength training are: * Myogenic - changes ...read more.

* Tackling The side tackle is an effective way to put your opponents on their backsides. * Evasion How to fool a defender with a fake pass. Strategy A plan for achieving an objective tactically and strategically, both tactical and strategic are elements that make up the game. These are employed by an individual or team in order to gain an advantage over the opposition. Strategy in rugby: * Know the strengths and weaknesses of the opposing team. * Choose the best players to carry out the plan and allow the other players to play supporting roles. * Take the weather and ground conditions into consideration. * Create space on the field, recognize useful space and use this space to best advantage. * Determine what worked and what didn't in your game this gives you a framework for constantly improving your rugby overall. B Psychology Can cause participators to react both physically and mentally in a manner that can negatively or positively affect their performance abilities. They may become tense; their heart rates race; they break into a cold sweat; they worry about the outcome of the competition; they find it hard to concentrate on the task in hand but all that ...read more.

only front rows and locks). When a normal scrum takes place, the players in the three front row positions and the two lock positions must have been suitably trained for these positions. If a team cannot field such suitably trained players because: either they are not available, or a player in one of those five positions is injured or has been sent off for Foul Play and no suitably trained replacement is available, then the referee must order uncontested scrums. In an uncontested scrum, the teams do not compete for the ball. The team putting in the ball must win it. Neither team is allowed to push the other team away from the mark. Under 19 Variations No wheeling. A team must not intentionally wheel a scrum. Penalty: Penalty Kick If a wheel reaches 45 degrees, the referee must stop play. If the wheel is unintentional, the referee orders another scrum at the place where the scrum is stopped. Maximum 1.5 metres push. A team in a scrum must not push the scrum more than 1.5 metres towards their opponents' goal line. Penalty: Free Kick Ball must be released from scrum. A player must not intentionally keep the ball in the scrum once the player's team has heeled the ball and controls it at the base of the scrum. ...read more.