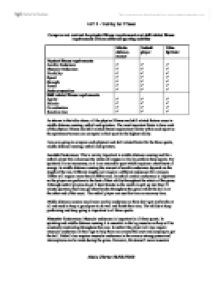 I am now going to compare each physical and skill related factor for the three sports, middle distance running, netball and sprinters.

Aerobic Endurance: This is mainlyimportant in middle distance running and for a netball player this is because the intake of oxygen is vital to perform these sports. For sprinters it is not necessary, as it is an anaerobic sport which requires a short burst of energy. In middle distance running the amount of aerobic endurance depends on the length of the run. Different lengths will require a different endurance for example, 1500m will require more than an 800m race. In netball aerobic endurance is important so the player can perform to the best of their ability throughout the whole of the game. Although netball players do get 3 short breaks as the match is split up into four 15 minute quarters, they also get short breaks throughout the game whilst the ball is at the other end of the court.  The netball player can use this time as recovery time.

Middle distance runners need more aerobic endurance as they don’t get any breaks at all and need to keep a good pace to do well and finish their race. The ability to keep performing and keep going is important in all three sports.

Flexibility: Flexibility is required in all three sports. However this is needed more in netball than sprinting and middle distance running because the netball player needs to be able to move around the court in different directions. They also need to be able to intercept and to defend the ball and this requires flexibility in the elbow and shoulder joint to catch and throw the ball. It is also needed in the hip joint to turn quickly and the knee joint to be able to jump easily. All sports men and women need flexibility so they aren’t prone to so many injuries. Middle distance running and sprinting doesn’t require as much flexibility but they still need a good level to maintain a good rhythm and stride throughout their race. If any type of runner weren’t flexible they would find it hard to run their race, as the hip joint needs to be flexible to help maintain their stride pattern.

Speed: This is important in every sport because all competitive sport requires speed. In netball you need to be able to move quickly around the court to dodge players and intercept balls. Speed isn’t constantly required but short bursts will be needed. Speed in sprinting is the main factor as the idea of the race is for the fastest person to win. Middle distance running also requires a good level of speed as many races can lead to sprint finishes which all comes down to speed.

Strength: A good level of strength is needed in netball this is so the ball can be thrown strongly to be sure the players receive the ball without it being intercepted.

Middle distance running doesn’t require as much but still requires a small amount to help them complete the race and to keep a good position within the race. As for middle distance runners, sprinters don’t need much strength as they aren’t pushing against a resistance or an opponent.

Power: Levels of power depend on the sport, the component and the type of ball being played. Netball requires different levels of power for example, if a long ball is going to be played a powerful throw will be needed to make sure the ball reaches the player. If a short pass is going to be made less power is needed as the player is likely to fall over if the ball hits them at force. In middle distance running it depends on what type of race it is. If a steeplechase is taking place then power will be needed to get over the hurdles and to get out of the water after landing. In sprinting power is needed to get the sprinter out of the starting blocks as the starting blocks can determine the race ahead.

Body Composition: Body composition is vital in every sport as it can depend on the overall performance. If excess body weight is being carried then it will slow the sportsman/women down, affecting their performance. The netball player should have a good body composition but it is not as important as in sprinting as netball is a team game and not all players are allowed to move all over the court. Body composition in sprinting and middle distance running is vital as it can change a person’s speed and the way they move making them slower and not keeping up with other competitors.

Agility: Agility is needed in all three sports because they may have to respond to differing events that may occur. Netball players need to be able to turn quickly to dodge their players and get into spaces to receive the ball. Sprinters don’t need much agility but they need to be aware in case another sprinter falls during the race. In middle distance running they don’t have their own lane so as runners are coming into the far lane, they need to be careful not to knock into one another.

Balance: Balance is most important in netball rather than middle distance running and sprinting, because netball players have to be able to hold a static balance whilst defending. They also need dynamic balance to help them stay on their feet whilst landing a jump. In middle distance running not much balance is needed unlike in steeplechases as when going over the hurdles they need to be able to maintain an upright position to enable then to make the hurdle without knocking it over and land well. Balance is hardly ever required in sprinting although a slight amount of dynamic balance is needed to keep an upright body position to maintain good rhythm and stride.

Co-ordination: Is vital in all three sports as all of these sports require a good level of co-ordination. This is to ensure the movements needed in each sport are carried out to the best ability of the sportsman/women. In netball co-ordination is needed to catch the ball and pivot at the same time without moving one of your feet. In middle distance running and sprinting good co-ordination is needed to maintain a good running stride to enable them to get as much speed as possible without hitting into another competitor.

Reaction time: reaction time is important in all sport but in other sports the reaction time can make or break the event and is therefore a vital aspect. In sprinting the whole race can depend on the start and who gets away the fastest so reaction to the gun needs to be quick. The same applies to middle distance running although it is not as important as sprinting as time can be made up throughout the duration of the race. In netball reaction time needs to be used whilst reacting to a stimulus, and in a toss up situation the ball needs to be won as soon as it is released to make sure the ball in won.