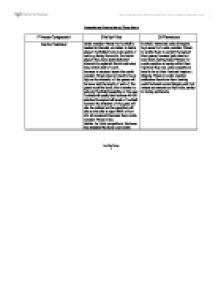 Fitness Component Similarities Differences Cardio Vascular Cardio vascular fitness for football is needed in intervals, as similar to tennis players footballers have some points of rest e.g. during throw-in's. For tennis players they have small dedicated intervals to replenish thirsts and when they switch ends of court. However in amateur tennis the cardio vascular fitness does not need to be as high as the intensity of the games will be lower and the length of each of the games would be lower, this is similar to judo and football. Depending on the ages football will usually last between 40-90 minutes throughout all levels of football however the intensity of the game will also be reduced as the opposition will also not be able to input 100% effort into all movements because their cardio vascular fitness is low. Similar for Judo competitors, the lower the standard the lower your cardio vascular fitness can be as there is not as much pressure applied from your opponents and the amount of matches played will be less than a higher ranked player. Football, Tennis and Judo all require high amount of cardio vascular fitness to enable them to persist throughout their games, however judo does not need much running based fitness for cardio vascular as rarely within their fights do they run, Judo competitors tend to be on their feet and require a skipping fitness in cardio vascular endurance therefore their training would be based around skipping and fast intense movements on their toes, similar to boxing and karate. ...read more.

Judo on the other hand requires an equal balance of flexibility throughout their body this is because main movements are used with the legs and the arms, because you can throw someone down by sweeping behind their legs but then you also need good flexibility within your upper body so that you can through opponents over your back and onto the floor. Body Composition All football, Tennis and Judo players need to have a slight muscular upper, slender trunk, toned legs. This all can decrease within different levels of the sport. Unlike footballers and Tennis players their weight is not really an important factor within their sport just as long as they have the required muscle groups and are fit how heavy or light they are is never really an issue, however in judo weight is an important factor because the category of which a competitor fights in is dependant on their weight, therefore judo players have to be careful they do not gain too much muscle as this could make them very heavy and they may have to fight against broader competitors which would make it very difficult to throw them. Agility Agility in football is dominant with the lower body this is so it allows them to dodge past players, similar to judo as they require agility to allow them to dodge attacking movements coming from their opponents. Tennis also requires agility within their legs this is so they can dodge to the flight path of the tennis ball. ...read more.

distance at a quick speed either travelling with a ball or without, however in judo they require to speed to mainly dodge around their opponent mainly to intimidate their opponents however the action they require to be quick are short and sharp movements to attack their competitors. Tennis players use speed mainly within their shots not much is used over large distances as their court's distance is much smaller than a football pitch. Power Power in football is needed within their legs dominantly this is so it allows them to swing their legs back in order to get speed behind their shots, this is similar to tennis however they require power within their arms to in order to transfer into the rackets swinging into the flight path of a tennis ball. Power within the legs is also required in football in order to jump up for headers, this is similar to judo as they require power in their legs to initially push against they opponents strength when they are trying to pin them down to the ground. Unlike football where power is only ever needed within the legs judo requires power also within their arms this is so it enables them to lift their opponents in the air in order to throw them. Also in tennis they require power dominantly in serves there for most this power would generate from the core and then sent outwards to the shoulders so they can swing their arms back. ?? ?? ?? ?? Comparing and Contrasting my Three Sports Letitia Price 1 ...read more.