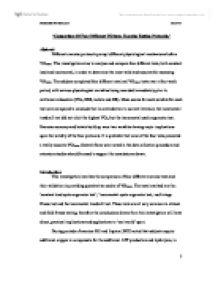 'Comparison Of Four Different VO2max Exercise Testing Protocols.' Abstract Different exercise protocols prompt different physiological mechanisms before VO2max. This investigation aims to analyse and compare four different tests, both constant load and incremental, in order to determine the most valid and accurate for assessing VO2max. Ten subjects completed four different maximal VO2max tests over a four-week period, with various physiological variables being recorded immediately prior to volitional exhaustion (VO2, RER, lactate and HR). Mean scores for each variable for each test were compared to conclude that in contradiction to current literature, the incremental treadmill test did not elicit the highest VO2, but the incremental cycle ergometer test. Exercise economy and lactate build up were two variables having major implications upon the validity of the four protocols. It is probable that none of the four tests presented a totally accurate VO2max. Several flaws were noted in the data collection procedure and extension studies should be used to support the conclusions drawn. Introduction This investigation involves the comparison of four different exercise tests and their validation in providing quantitative results of VO2max. The tests involved are the: 'constant load cycle-ergometer test'; 'incremental cycle-ergometer test; multi-stage fitness test and the incremental treadmill test. These tests are all very common in clinical and field fitness testing, therefore the conclusions drawn from this investigation will have direct, practical implications and applications to 'real world' sport. During periods of exercise Hill and Lupton (1923) noted that subjects require additional oxygen to compensate for the additional ATP production and hydrolysis, in relation to rest. They also noted that a plateau occurs in the rate of oxygen consumption (VO2) even though exercise intensity increases, leading them to the assumption that there is a maximal rate of oxygen consumption and utilisation, or VO2max. Hill and Lupton (1924) concluded that circulatory and pulmonary systems being unable to provide sufficient O2 to mitochondria caused VO2max. ...read more.

at a work rate of 120watts, succeeded by a brief session lasting a couple of minutes, stretching the major muscle groups involved. Using the same cycle-ergometer, the subject then pedalled at a frequency of 60rpm during the whole test, with the speed being regulated by the subject observing the speedometer, and by observers encouraging the subject to maintain speed. This ensured the power output for each stage was attained. After three minutes of constant workload, the power output was increased 30watts by adding 0.5kg to the cradle. During the final minute of each three minute stage, expired air was collected using Douglass Bags, nose clips and one way mouth valves, all of which supplied by Harvard Apparatus Ltd. Heart rate was also recorded every 15 seconds when expired air was being collected (using a Polar Accuracy Plus heart rate monitor made by Polar Electro Oy, in Kempele Finland). Each three-minute stage was timed using a stopwatch to enhance reliability. When the subject felt they were approximately one minute's exercise from total exhaustion they gave a pre-determined signal to alert data collectors of the impending cessation of exercise. At this point expired air was collected and heart rate was monitored until volitional exhaustion forced the subject to stop exercising. Collection of air and heart rate monitoring was done using the same methods as described previously for the end of each stage. Subjects were encouraged and motivated in an attempt to prolong the exercise and reach a more accurate maximum measurement, and if the subject was able to continue exercising for longer than the self-predicted final minute, an accurate record of expired air collection time was taken using a stopwatch to ensure accurate VO2 values could be calculated. Five minutes post-exercise, blood lactate measurements were analysed using a small blood sample. The volume of expired air collected at each stage was measured using a Dry Gas meter designed by Harvard Apparatus Ltd, and expired air content was analysed, using a Gas Analyser manufactured by Analytical Development Co Ltd, in Hodderson, England. ...read more.

Incremental tests gave higher VO2 values than the constant load test (fig 2) due to physiological mechanisms associated with the different protocols. Constant load tests involve immediate and constant power output of maximal intensity, promoting a very fast build-up of lactate, and due to the maximal power output, a Lactate Steady State is not achieved hence fatigue at a lower VO2. Hill and Lupton's (1923) circular argument describes how fatigue is due to oxygen deficiency during exercise (lactate build up > oxidative removal of lactate due to O2 deficiency). Incremental tests increasing from lower power outputs lead to steady state being achieved at lower power outputs. Therefore lactate build up occurs over a greater period of time and more gradually, delaying fatigue due to greater tolerance. Constant load tests promote rapid lactate build up which is more intolerable due to sudden increases in toxicity rather than gradual. Hence incremental tests elicit higher VO2 values than constant load, and are more accurate/ valid in terms of VO2max testing. The MSFT showed slightly lower but similar VO2 scores as the constant load tests, even though it is incremental. Exercise economy and motivation are the most likely causes for this result. In summary, this investigation showed the incremental cycle ergometer test to elicit the most valid and reliable VO2max value of the four tests, however due to limitations in various aspects of the protocol it is unlikely that any of the tests show a true representation of VO2max. Further studies are needed to correct flaws in procedure and support conclusions drawn from this study. Constant load tests elicit more invalid VO2max scores than incremental tests however tests using ergometers are more valid due to their ability to limit varying exercise economies. It is possible lactate build up led to premature fatigue in all protocols, however the lactate sampling procedure might be unreliable and therefore extended studies would be appropriate if conclusions are to be more reliable. Word Count: 3789 Appendices Appendix 1 - Subject consent form. ...read more.