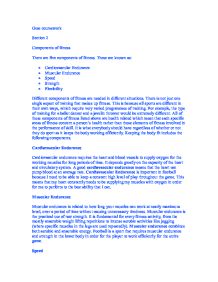 * Speed training is performed by using huigh velocity for brief intervals. This will ultimately bring into play the correct neuromuscular pathways and energy sources used. * Speed is how fast something can be done and how much time it takes to do that action. The differential rate at which an individual can perform a movement or cover a distance in a period of time. Strength The amounts of force a muscle can exert against a resistance Flexibility The range of movement possible at a joint. Skill related components Success in sporting does not always rest solely upon the components of fitness. To be successful we need to add certain skill related components. The following are all components of skill: * Agility * Balance * Co-ordination * Speed of reaction * Timing Like other fitness components, skill related components can also vary in importance from one activity to another. Agility Agility is the ability to change direction quickly. It involves the performer's ability to move in a controlled way. Agility is specific to freedom and ease of whole body movement. Agility is used in football as players need to adjust their feet promptly in order to position their bodies before making a tackle or pass, or to turn quickly whilst on the move. ...read more.

Even though the nature of the responses may be different, the mechanisms involved are exact and essentially involve two closely related processes: * Reaction time * Movement time Reaction time is the time it takes between the initial stimulus for example, the ball is seen to be kicked towards the goal and the initiation of a response on the part of the goalkeeper (he starts to move to stop the ball). Movement time is the time taken between the initiation of a response and the completion of the movement. So, it's the time taken between the goalkeeper deciding on the right move to save the goal and his starting to move (initiation of the response) and making the save itself (completion of the movement). Response time -the speed of reaction- is the total amount of time between the initial stimulus, the response to it and the completion of that response, so that: Reaction time + Movement time = response time Timing Timing is simply about performing a skill at the right time or in the right way so that it is effective. The timing of a pass in football can be crucial. Timing can be influenced by internal mechanisms, the degree to which we can relate to and respond to what others are doing in a game. ...read more.