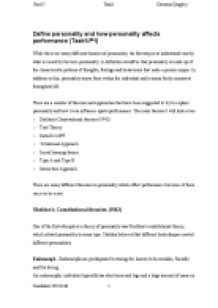 ﻿Unit17 Task1 Catriona Quigley Define personality and how personality affects performance (Task1/P1) While there are many different theories of personality, the first step is to understand exactly what is meant by the term personality. A definition would be that personality is made up of the characteristic patterns of thoughts, feelings and behaviours that make a person unique. In addition to this, personality arises from within the individual and remains fairly consistent throughout life. There are a number of theories and approaches that have been suggested to try to explain personality and how it can influence sports performance. The main theories I will look at are: 1. Sheldon's Constitutional theories (1942) 2. Trait Theory 3. Cattell?s 16PF 4. Situational Approach 5. Social learning theory 6. Type A and Type B 7. Interaction Approach There are many different theories on personality which affect performance but none of them can ever be exact. Sheldon's Constitutional theories (1942) One of the first attempts at a theory of personality was Sheldon's constitutional theory, which related personality to soma type. Sheldon believed that different body shapes created different personalities. Endomorph - Endomorphs are predisposed to storing fat, known to be sociable, friendly and fun loving. ...read more.

The 16 PF (Personality Factors) test which resulted from this work is still in use today. He was an early proponent of using factor analytical methods instead of what he called "verbal theorizing" to explore the basic dimensions of personality, motivation, and cognitive abilities. One of the most important results of Cattell's application of factor analysis was his discovery of 16 factors underlying human personality. He called these factors "source traits" because he believed they provide the underlying source for the surface behaviours we think of as personality. This theory of personality factors and the instrument used to measure them are known respectively as the 16 personality factor model and the 16PF Questionnaire. Introverts tend to be drawn to individual sports like long-distance running; extroverts prefer team- and action-orientated sports like football. Psychologists think that extroverts are drawn to these types of sport because they offer high levels of excitement and stimulation, and the ever-changing and unexpected environments required to keep them interested in the activity. Athletes that are towards the unstable or neurotic end of the scale experience high levels of over-arousal during the early stages of performance, which can lead to lower levels of performance. ...read more.

Type A performers are the kind that never turn up to training and never listen to there coaches, for example; Wayne Rooney who is a famous football player is all one sided which shows he never listened to his coach, however he has a very high ability of achievement which gives him his talents, although a type A can have two personalities with no gaols so the type A with no or little ability will never be a high achiever. Type B personalities tend to be more tolerant towards others, more relaxed and reflective than their type A counterparts, experience lower levels of anxiety and display higher levels of imagination and creativity. In sport these traits can either help or hinder performance, type A personalities are more likely than type B personalities to continue participating in a sport when the situation becomes favourable or when they are not motivated to take part. Effects on sports performance There is no direct link between personality type and successful sporting performance. Some research has suggested that certain personality types may be more attracted to certain sports, but little says that your personality will make you a better athlete. Candidate NO.8246 ...read more.