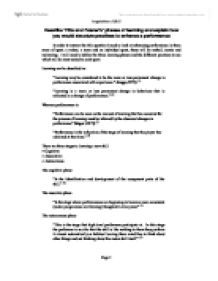 Describe 'Fitts and Posner's' phases of learning and explain how you would structure practises to enhance a performance.

Describe 'Fitts and Posner's' phases of learning and explain how you would structure practises to enhance a performance In order to answer the title question I need to look at enhancing performance in three areas of sport, a racket, a team and an individual sport, these will be netball, tennis and swimming. I will need to define the three learning phases and the different practices to see which will be most suited to each sport. Learning can be described as: "Learning may be considered to be the more or less permanent change in performance associated with experience." Knapp (1973) (1) "Learning is a more or less permanent change in behaviour that is reflected in a change of performance." (4) Whereas performance is: "Performance can be seen as the amount of learning that has occurred for the process of learning must be inferred by the observed changes in performance" Singer (1975) (1) "Performance is the reflection of the stage of learning that the player has achieved at that time." (4) There are three stages to learning a new skill: * Cognitive * Associative * Autonomous The cognitive phase: "Is the Identification and development of the component parts of the skill." ...read more.

"The cognitive phase is the exploratory phase."(4) At the cognitive stage you are accomplishing the basic technique to be able to functionally complete the skill. For example in netball you could be practicing a chest pass and getting feedback from your teacher or coach, this feedback is important as it you then recognise that you have made errors. The best method for teaching cognitive learners is using distributed practices as the practice is broken down into sections allowing the performers to have a break and receive feedback before starting again. However there is also an element of fixed practice as well as this allows repletion of the skill so that it becomes 'over learned', although technically they may be sound, they may now need to practice the skill in more pressurised situation to help work towards the fluidity, consistency and accuracy that is achieved later on. Performance is normally characterised by fewer errors, and those that there are, are normally caused by difficulties in controlling speed or force. An ideal structure of a practice to enhance this performance is to adopt a 'whole - part - whole' routine that allows the player to get a clear mental image and a feel for the whole skill before practices the elements of it. ...read more.

To conclude I believe that each stage of learning suits a different method of teaching and different practices. However, I feel that the practices overlap between the stages, as there is no definite way for cognitive, associative or autonomous learners to practice at each stage. This is because the stages are quite wide apart and there are sections in between them were performers could be as they are no longer cognitive but not quite associative. For cognitive learners I think that distributed is the best method of practices, which will enhance their performance the most, but they also could use the fixed practices as this is using the basic skills and purely learning them until then become routine. Associative learners should use fixed and variable practices to enhance their performance, fixed means they repeat the skill over and over but variable is where they put the skill into action in game situations. Autonomous performers should practice using the massed practice as this practice method is designed to stimulate fatigue and are only for the performers with a high-level of fitness and are experienced. The performers can then act on intrinsic feedback, which will help enhance their performance. ...read more.