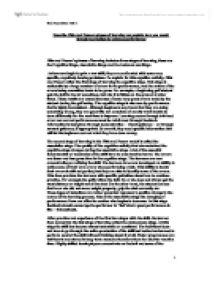 Describe Fitts and Posners phases of learning and explain how you would structure practices to enhance performance Fitts and Posner's phases of learning includes three stages of learning, these are the Cognitive Stage, Associative Stage and the Autonomous Stage. As learners begin to gain a new skill, they are confronted with some very specific, cognitvely leaning problems. To explain for this cognitive activity, Fitts and Posner called the first stage of learning the cognitive stage. This stage is noticeable by a large number of errors in the performance, and the nature of the errors being committed tends to be gross. For example, a beginning golf student gets the ball in the air sometimes, but also it dribbles on the ground at other times. These results are caused because of some very gross errors made by the student during the golf swing. The cognitive stage is also seen by performance that is highly inconsistent. Although beginners may know that they are doing something wrong, they are generally not conscious of exactly what should be done differently for the next time to improve. ...read more.

At this stage the skill has become almost automatic or consistent. The individual does not have to go through the entire production of the skill but he/she has learned to perform most of the skill without thinking about it at all. Motor programmes are well learnt and stored in long-term memory therefore there is a shorter reaction time. Highly skilled tennis players concentrate on the ball and some of the particular adjustments that they must make in their normal serve to produce a particular shot. Another example would be where skilled dancers do not think about the individual steps of the routine, because they have become automatic but they have now learnt to concentrate on some of the more important phases of the routine that could be particularly difficult. In the autonomous phase peformers are now able to not only detect their own errors but also make the proper corrections to improve it. Also in this stage the changing of the day-to-day performance has become very small. This autonomous stage is resulted by a large amount of practice which allows performers to produce a reaction without having to concentrate on the whole movement. ...read more.

Ideally, the skill should be 'over learnt' to allow attention to be focused elsewhere. Over learning is the practice time spent beyond the time it takes to perfect the skill. So for this practice I would instruct it by maybe verbal or written, or contained on a worksheet. I would also have to make sure the pupil understands the task and knows what the targets are and can begin to practice. Once I have done that I would need to give intrinsic feedback and provide a lot of information. I then need to test to see what the pupil has leant so far. After that I would then perform the serve or it may be appropriate for a peer to demonstrate the skill. This then lets the pupil have a model of the perfect serve in his memory to work from (mental rehearsal). But the demonstration must be a good one. I then get to the applying part of the skill. Here the pupil needs to practice the serve in a planned situation so that it would help him/her to use it in a real game situation. Also near the end the pupil will need to practice skills such as opposed, unopposed, whole, and part-whole. Skill Acquisition Task 2 1 ...read more.