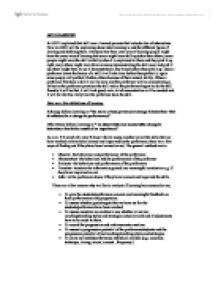 AO2 LEARNING In AO1 I explained that skill was a learned process that includes lots of subroutines. Now in AO2 I will be explaining about what learning is and the different types of learning and defining them. Everyone has there own way of learning people might have the same way of learning but some might learn skills quicker than others, some people might learn the skill verbally when it is explained to them and they pick it up right away others might learn from someone demonstrating the skill once and pick it up others might have to see it demonstrated a few times before they pick it up. Once a performer learns the basics of a skill it will take time before they perfect it, again some people will perfect it before others because of their natural ability. When a performer first does a skill it will be slow and the performer will be concentrating a lot but as the performer practices the skill and as the performer begins to do the skill fluently it will be fast ,it will look good, not a lot of concentration will be needed and it will be like this every time the performer does the skill. ...read more.

The easier parts of the skill are becoming fluent and are well learned, the more difficult elements of the skill require most of the spare attention. The performer is beginning to get a sense of internal kinaesthetic feedback when he/she performs the skill well. The performer is starting to detect and correct his/hers own mistakes and success rate has risen to 5-7 out of 10. Autonomous or Motor phase: This is the final stage of learning, at this stage performances are consistent, fluent and aesthetically pleasing. The motor programmes involved are well learned and stored in the long term memory. The spare attention is now focused on opponents and tactics. For the performer to maintain the new skill at this level, the performer must constantly practicing the skill to reinforce the motor programmes. Success rate is now 9 out of 10. Performance Curves As I have already mentioned a 'one off' performance does not mean that learning has occurred. For learning to have taken place there has to be a relatively permanent change in performance over time, this comes as a result of practice and/ or experience. ...read more.

Positive : positive feedback when the skill or performance has been completed correctly or successfully. This type of feedback can be used to reinforce learning which can lead to the successful performance being repeated (e.g a coach or teacher praising a performer when they perform a skill correctly at a young age.) Positive feedback is known to facilitate perceived competence and help intrinsic motivation but it is important that the coach/teacher des not give to much praise because it could affect the performer's own perceptions of their performance and possibly affecting motivation. Negative: negative feedback occurs when a performer performs a skill or task incorrectly. An example of this would be in a match when a free taker in hurling or gaelic continue to miss frees. The see that the free has been missed, then they get comments from team mates this is followed by their own summary of what they did incorrectly not enough power in the shot, to much curl etc. The teacher or coach may indicate what faults happened/ is happening and suggest corrections. All of this feedback should help insure that the shots are more successful in future. ...read more.