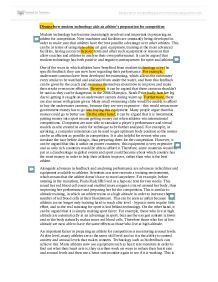 Discuss how modern technology aids an athlete's preparation for competition

Discuss how modern technology aids an athlete's preparation for competition Modern technology has become increasingly involved and important in preparing an athlete for competition. New machines and facilities are constantly being developed in order to make sure that athletes have the best possible advantage over other athletes. This can be in terms of using state of the art gym equipment, training at the most advanced facilities, having access to hypoxic tents and other such equipment or resources that allow coaches and athletes to analyse their own performance. It can be argued that modern technology has both positive and negative consequences for sport and athletes. One of the ways in which athletes have benefited from modern technology is by the specific feedback they can now have regarding their performance. For example, underwater cameras have been developed for swimming, which allows the swimmers' every stroke to be watched and analysed from under the water, and from this feedback can be given by the coach and swimmer themselves about how to improve and make their stroke even more effective. ...read more.

Scientists can now recreate a training environment, which means that the athlete doesn't have to travel anywhere. For example, before running in the marathon, Paula Radcliffe lived in a hypoxic tent for two weeks. This raised her red blood cell count and enabled more oxygen to travel around her body, thus improving her performance and preparing her for the competition. This is similar to altitude training, in which an athlete trains at a high altitude in order to increase the number of red blood cells in their bloodstream. This can be seen as unfair because athletes are no longer only training hard to reach elite level - hypoxic tents require little effort, and so the real meaning for sport is lost behind technology. On the other hand, it can be argued that it is simply making sport fairer. For example, those who live at high altitude are automatically at an advantage in sport, because the oxygen content is lower and so the body naturally makes more red blood cells. ...read more.

However, in order to reach an elite level, an athlete has to be completely dedicated. Specific clothing has also been developed for sportspeople in order to prepare them for elite competition. For example, Cathy Freeman in the Sydney 2000 Olympics wore a specially designed suit in order to keep her body at an optimum temperature for the race. This shows how technology has been developed in order to prepare her and give her the best possible advantage in the race. Speed also developed the SZR racing suit, which gives less drag in the water and makes them more streamlined. In conclusion, there are many ways that athletes can prepare themselves for important competition through the use of modern technology. Some of these relate to the learning and refining of skills, such as underwater cameras, which provide essential feedback for performers. Others can be to do with the right clothing or equipment that will give them the best advantage over other athletes. However, there is still some debate as to whether such technology should be used, as it may be unfair to other athletes and poorer countries. ...read more.

A very strong piece of work with clear research and practical applications to current technological advance.