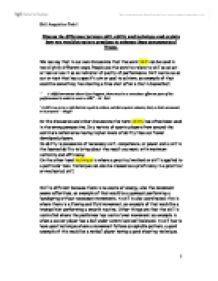 Discuss the difference between skill, ability and technique and explain how you would structure practices to enhance these components of fitness.

Discuss the difference between skill, ability and technique and explain how you would structure practices to enhance these components of fitness. We can say that in our own discussions that the word 'skill' can be used in two slightly different ways. People use the word to relate to skill as an act or task or use it as an indicator of quality of performance. Skill can be as an act or task that has a specific aim or goal to achieve, an example of that would be something like shooting a free shot after a foul in basketball. " A skilful movement doesn't just happen, there must be a conscious effort on part of the performance in order to exert a skill" - M . Rob "A skill is an act or a task that has a goal to achieve and that requires voluntary body or limb movements to be properly" - Magill In this discussion and other discussions the term ability has often been used in the wrong perspective. In a variety of sports players from around the world are referred as having higher levels of ability than our 'home' developed players. So ability is possession of necessary skill, competence, or power and a skill is the learned ability to bring about the result you want, with maximum certainty and efficiency. ...read more.

but others would take much longer and is less doing well at any given skills. There are different kinds of abilities; one of them is psychomotor ability. This is the ability to process information about how and when we move. For example, reaction time, a football player must react quickly to an oncoming player who changes direction. Another type of ability is perceptual, this is the ability to sense the interpret sensory inputs or information; example is awareness of a rugby player of the positions and actions of opponents. Ability can be enduring, people largely hold on to our abilities through their lives, for example riding a bike. This ability will never leave them. Another type of ability is Gross Motor Ability. This ability is where someone is able to move using muscle movements; an example is being able to run. Other things are like general abilities, which involves nothing really its just specific abilities. So specific abilities are skills that require different abilities, a good example would be a gymnast using balance, strength and flexibility. A good sportsman may have many different groups of abilities, an example would be a good all round sportsperson could have specific abilities such as good hand eye coordination and balance which could be transferred to lots of racquet games. ...read more.

Racket swing back whole skill C) Strike D) Follow through. A.Toss B.Swing C.Strike D.Followthrough Whole part whole is the initial experience of the whole skill and then it is broken down. A B C D Whole Skill A B C D A B C D Whole Skill Then there is the progressive part where it is also the initial experience but it is then a build up to the skill. A B C D (A + B) (AB + C) (ABC + d) = ABCD whole skill There are three different practices that can be taken forward, these are, variable, distributed, and massed practices in the whole/part/whole. They should be as realistic as possible. Distributed practice is where the training sessions include rest intervals. A massed practice is a learned skill that is habitual and concerns repetition of performance. Here is a example of what my practice would look like: - A , X B OPEN CLOSED X = position of the Tennis serve (this is mostly open but a few closed elements) A = Goalkeeper attempting to save a shot at goal B = Athlete performing a javelin throw. To finish this discussion of I have to say that all skills have elements of all the classifications above and most skills have characteristics which make them near one end of a classification continuum. Skill Acquisition Task 1 1 ...read more.