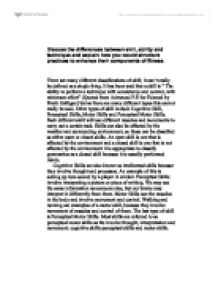 Discuss the differences between skill, ability and technique and explain how you would structure practices to enhance their components of fitness.

Discuss the differences between skill, ability and technique and explain how you would structure practices to enhance their components of fitness. There are many different classifications of skill; it can't really be defined as a single thing. It has been said that a skill is " The ability to perform a technique with consistency and control, with minimum effort" (Quoted from Advanced P.E for Edexcel by Frank Galligan) but as there are many different types this cannot really be said. Other types of skill include Cognitive Skill, Perceptual Skills, Motor Skills and Perceptual Motor Skills. Each different skill will use different muscles and movements to carry out a certain task. Skills can also be affected by the weather and surrounding environment, so these can be classified as either open or closed skills. An open skill is one that is affected by the environment and a closed skill is one that is not affected by the environment it is appropriate to classify gymnastics as a closed skill because it is usually performed inside. Cognitive Skills are also known as intellectual skills because they involve thought and processes. An example of this is adding up runs scored by a player in cricket. ...read more.

Rugby players have to have quite a high level of cardio-vascular fitness and muscular fitness to be able to perform to a high standard in the game. The components of fitness are as follows: flexibility, strength, which has four different components to it. These include Maximal Strength, which is the maximum amount of force that an individual can produce in a given moment of unlimited time. e.g. powerlifting. Reactive Strength allows the individual to absorb heavy impacts and explode out of an impact or landing with great force e.g. long jump take off. Sustained Strength is a maintained force of maximal strength over repeated contractions e.g. rugby player at a maul. Strength endurance is similar to above. However strength maintained over longer periods of time e.g. marathon. The rest of the components of fitness are: power, speed, muscular endurance, mobility, cardio-vascular endurance, co- ordination, local muscular endurance anaerobic endurance, and reaction time and body composition. Each different sport will require all theses different components of fitness to be able to perform in their sport. Some sports will require different or more than others. Components of fitness are important because without them a performer would not be able to perform their chosen sport or activity. ...read more.

This will make them become second nature to the performer. This will only happen if you are taught the correct technique and the practice that you are doing is correct for the sport being undertaken. If the correct technique is not taught, then the performer will pick up bad habits and that may affect the out come of a how they perform in the next game or match. In conclusion, it is clear that there are differences between skill and ability and that people will use the word skill but they really mean technique. It is also clear that technique is how you carry out your actions in a sport. If you have been taught the wrong technique, then that is what will be used in the sport. Skills and abilities are needed in different forms in different sports, although skills and abilities are needed in most sports for example quick reflexes. Practices can help to show you how the correct technique is performed but you have to be born with some ability otherwise learning the technique will be pointless. We have already seen that there isn't a perfect sportsman. For sports, which you get an end result like scoring a goal in football, your actions leading up to, the goal could be perfect, and if you had done something differently you may not have got the same result. ...read more.