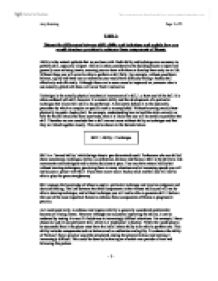 TASK 1: Discuss the differences between skill, ability and technique and explain how you would structure practices to enhance these components of fitness. Ability is the natural aptitude that we are born with. Both ability and technique are necessary to perform skill, especially in sport. Ability is often considered as the building blocks in sport and generally seen as being innate, meaning you are born with them or develop them early on in life. Without these you will never be able to perform a skill fully. For example, without good basic balance, agility and hand eye co-ordination you would have difficulty hitting a hockey ball affectively and efficiently. Although these can in some cases be improved on, someone who is not naturally gifted with them will never find it instinctive. Technique is the actually physical mechanical movement of a skill, i.e. how you hit the ball. It is often confused with skill; however it is natural ability and the development of a particular technique that allows for a skill to be performed. A dictionary defines it as the systematic procedure by which a complex or specific task is accomplished. ...read more.

They have to place one foot in each of the ladder rungs. The difficulty can be increase by introducing progressively different footwork combinations, such as two feet in each rung and so on. The outcome may be that the actual ability to balance and of agility has not increased or improved but the athlete will be pushing their abilities to the limit and perhaps expanding their capability to control them. Enhancing technique on the other hand will result in a much more obvious and apparent improvements. Technique is vital because it trains the brain and body in certain patterns that will be needed for a certain skill. Ability allows for this to happen. It's important to learn the correct techniques, practice them and use them during the game as it ensures a long-term involvement in the sport, development as a player, avoidance of bad habits and prevention of injuries. Many sports have "risky" elements such as tackling, jumping, landing, stopping, catching, twisting and equipment such as sticks, bats and rackets. The correct technique helps control these risks as well as allow the athlete to develop skill successfully. ...read more.

Skills are developed only if the individual is allowed to practice the activity correctly and often. The degree of perfection will be related o the individual's potential ability. It is that obvious skill is vital to becoming a successful sports person in any sport, therefore it is essential that it developed and enhance all the time. As I mentioned early, skill is affectively when to apply a certain technique to achieve a pre-determined result and it involve judgment and decision making. This must be practiced with conditioned opposition and then progressing to full competition, game like situations. Integration practices for skill progression would involve the enhancement of ability, technique and skill together through development games. Consequently an ideal progression in hockey for this particular skill would be to begin with 4 players against 1 defender in a given space with an objective of making 20 passes or scoring a goal after 10 passes. This would then progress to 3v1, then 2v1, then 2v2 and so on to even perhaps 3 defenders against 2 attackers. This structure will enhance the skill until the player makes it appear easy and effortless. Progressive practice and changes in drill environment allow the skill to become consistent, accurate and the player's decision of when to use it automatic, exact and precise. ...read more.