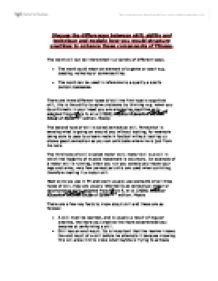 Discuss the differences between skill, ability and technique and explain how you would structure practices to enhance these components of fitness. The word skill can be interpreted in a variety of different ways. * The word could mean an element of a game or sport e.g. passing, volleying or somersaulting. * The word can be used in reference to a quality a sports person possesses. There are three different types of skill the first type is cognitive skill, this is the ability to solve problems by thinking e.g. when you do arithmetic in your head you are employing cognitive skill adapted from Davis B. et al (2000) Physical Education and the Study of Sport. 4th edition. Mosby The second type of skill is called perceptual skill. Perception is sensing what is going on around you without looking, for example being able to pass to a team mate in football without looking up shows good perception as you can anticipate where he is just from his calls. The third type of skill is called motor skill; motor skill is a skill in which the majority of muscle movement is voluntary. An example of a motor skill is running, when you run you consciously move your legs and arms, very few perceptual skills are used when sprinting, therefore making it a motor skill. ...read more.

* You would begin by asking the participant to practice a closed skill like serving, at first you would ask them to simply get the ball over the net. * The next step would be to attempt to aim for different parts of the box. * This practice could be improved even more by then asking him to practise a smash, this could be done by throwing the ball high into the air so that the player has to position himself correctly and return it efficiently. * Once this has been done then you could ask him to play against another player, making the practice more open as they will now have to think about the best place to place the ball as well as attempting to anticipate where the opponent is about to play the ball. Abilities cannot be learned so therefore you cannot practice improving ability. They develop as you get older and more mature and are modified by experience (adapted from Physical Education and the Study of Sport, Bob Davis et al). Technique can be improved with regular full game practice. As technique will improve with experience because the player will be able to judge for himself whether or not he has performed an action correctly and will work on trying to improve it the next time, therefore improving their technique. ...read more.