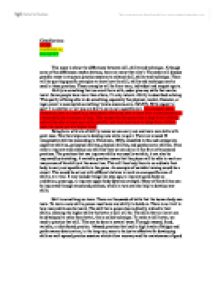 Classifications: TEAM INDIVIDUAL RACQUET This essay is about the differences between skill, ability and technique. Although some of the differences maybe obvious, there are many that aren't. The essay will discuss possible ways to structure practice sessions to enhance skill, ability and technique. There will be sporting specific examples to show how the skill, ability and technique can be used in these practices. These examples will be from team, individual and racquet sports. Ability is something that we are all born with, under pins any skills that can be learnt. Some people have more than others, it's only natural. Ability is described as being 'The quality of being able to do something, especially the physical, mental, financial, or legal power to accomplish something' (www.answers.com, 19/1/07). With respect to sport it is whether or not you are able to carry out a specific skill. For example, being completely new to a sport (e.g. basketball) and being able to learn how to pass properly in a reasonably short amount of time. This means that the person has a high level of ability and will be able to learn new skills quickly, and then learn how to adapt these skills to make his game get to a higher level. ...read more.

This can be done in several ways. Through massed, fixed, variable, or distributed practice. Massed practices that lead to high levels of fatigue and performance deterioration, in the long-run, seem to be just as effective for developing skills as well-spaced practice sessions which allow recovery and the maintenance of good practice standards. However, too much excessively massed practice can be detrimental to learning and other factors associated with performance. In a game situation skills are being changed and adapted constantly. This means that a skill has to be learnt from a basic skill, and then developed and practiced before being used in a game situation. For example, to practice an over head tennis serve it has to be learned as a basic skill. To start with there is the throw of the ball into the air, and then there is the hit, and finally the follow through. The skill can be practiced in stages, and then put together to make the final serve. It then can then be adapted to make it useable from any angle on the court, so that it always challenges the opponent. ...read more.

A perfect model is someone who is looked up to for their performance in a certain sport. E.g. Michael Johnson for the 200m and 400m with records of 19.32 and 43.18 respectively. Technique can be split down into sub-routines. These sub-routines mean that a skill can be developed easier. The sub-routines can be learnt as whole or part. A whole sub-routine means that a skill is learnt as one movement e.g. a golf swing. The part sub-routine means that a skill can be learnt in stages e.g. a badminton serve. Technique is usually taught to performers by a professional. This technique is often the one a performer will use throughout their sporting life. The technique of a skill depends on how it feels to the performer i.e. the performer has to feel comfortable with the technique before he can optimize his performance and develop his own technique and adapt it for maximum effectiveness. To conclude, there are many different ways to enhance these components. Most of them can be enhanced by practice. As the common saying says 'practice makes perfect'. The practices that can be used for all of the factors are mainly massed, distributed, variable and fixed which will work on certain areas of skill, ability and technique. ...read more.