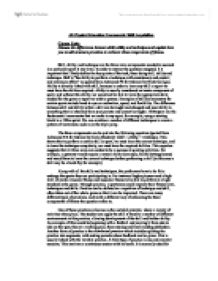 AS Physical Education Coursework: Skill Acquisition Chosen Task: Discuss the differences between skill, ability and technique and explain how you would structure practices to enhance these components of fitness. Skill, ability, and technique are the three main components needed to succeed in a particular sport at any level. In order to answer the question assigned, it is important that I firstly define the key points of the task; these being skill, ability and technique. Skill is "the ability to perform a technique with consistency and control, and minimum effort," as quoted from Advanced PE for Edexcel by Frank Galligan. Ability is directly linked with skill, because in order to learn any skill in sport we must have the abilities required. Ability is usually considered an innate component of sport, and without this ability, we would not be able to learn the appropriate skills needed for the game or sport we wish to pursue. Examples of abilities necessary for certain sports include hand-to-eye co-ordination, speed, and flexibility. ...read more.

Along with all the skills and techniques, the performers have to be fit to undergo the sports they are participating in. For instance Rugby players need a high level of cardio-vascular fitness and muscular fitness to be able to perform to a high standard in the game. Through practice, a sportsman could improve their fitness level, techniques and skills. Practice can be defined as a repetition of technique and skill, often taken out of the whole game so that it can be improved. There are many different types of practices, each with a different way of enhancing the three components of fitness the question refers to. One of these practices is known as the variable practice, where a variety of activities takes place. The student can apply the skill at hand to a number of different environments in this practice, allowing development of the skill and his/her ability. An example of this would be beginning with a football and moving it from side to side on the spot, then at a walking pace, then running and finally adding defenders. ...read more.

If the right technique is not trained, then the performer will pick up bad habits and that may affect the out result of a how they perform in the next game or match. Many people say that your ability cannot be enhanced as it is an innate component; however an Australian Sports Psychologist has found ways of improving hand-to-eye co-ordination by doing special eye exercises. These exercises are starting to be used more often in sports like cricket to progress hand-to-eye co-ordination but they are not yet proven to work. Technique, according to most textbooks can be easily enhanced and improved. Your technique can be enhanced and improved by criticism and advice from coaches telling you to change specific parts of your technique. For example, keep your head up when dribbling and looking for a pass in basketball. This feedback then can be used to improve your technique allowing you to go away and work on it in the next training session. From this, we can see it is possible to enhance both technique and ability, and therefore also skill according to the equation "skill = technique + ability." ...read more.