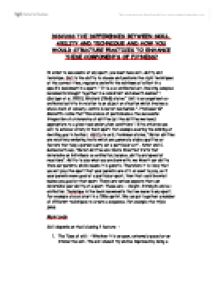 Discuss the Differences Between Skill, Ability and Technique andHow You Would Structure Practices To Enhance These Components of Fitness?

DISCUSS THE DIFFERENCES BETWEEN SKILL, ABILITY AND TECHNIQUE AND HOW YOU WOULD STRUCTURE PRACTICES TO ENHANCE THESE COMPONENTS OF FITNESS? In order to successful at any sport, you must have skill, ability and technique. Skill is the ability to choose and perform the right techniques at the correct time, regularly and with the minimum of effort in a specific movement in a sport. " It is a co-ordinated act, involving complex movements brought together in a consistent and smooth manner ". (Galligan et al, 2000). Welford (1968) states " Skill is an organised co-ordinated activity in relation to an object or situation which involves a whole chain of censory, central & motor mechanism ". Professor GP Meredith claims that "Excellence of performance-the successful integration of a hierarchy of abilities (all the abilities we have) appropriate to a given task under given conditions ". Elite athletes use skill to achieve victory in their sport. For example scoring the winning or deciding goal in football. Ability is as E. Fleishman states, "Motor abilities are relatively enduring traits which are generally stable qualities or factors that help a person carry out a particular act". Arnot and C. Gaines both say, "Motor abilities are innate inherited traits that determine an individuals co-ordination, balance, ability and speed of reactions". Ability is also what you are born with; we inherit our ability from our parents, which means it is genetic. ...read more.

The skill can finally be a serial skill. These kinds of skills tend to be low organisation, 3 types of guidance can improve the skill: - 1. Pure-part learning 2. Whole-part-whole learning 3. Progressive-part learning An example of pure-part learning is the running smash in tennis. An example of whole-part-whole learning is gymnastics. An example of progressive-part learning is the triple jump. 2. The Other factor is the type of learner The learner could be an experienced, fit and motivated learner where they would need both positive and negative feedback and also intrinsic feedback. This type of learner would benefit the most form doing massed practice. This is because it involves a continuous session with no breaks, which the learner would be able to cope with as they are fit. The learner will work constantly, allowing the skills to be tested under fatigue conditions as in a game situation. This will allow this type of learner to act on intrinsic feedback to improve their performance. An example is a badminton circuit. The learner could be an inexperienced, unfit and demotivated learner where they would need positive and extrinsive feedback. This type of learner would benefit the most from doing distributed practice. This is because it involves the division of a practice session into sections. The overall session involves breaks between each section during which the activity may be changed. ...read more.

Whereas for a less experienced learner giving them mostly positive feedback will get morale high and make them stick at the sport combined with a little negative feedback as this will allow for areas to improve in but too much negative feedback may keep morale low and maybe even take it lower and they may even quit the sport as they may think that they are not good at it. Skill, ability and technique are always closely linked. The book ' Advanced PE ' puts forward the equation: "Skill = Ability + Technique." The difference between skill and ability is that a skill can be taught and changed and your ability is something that is inherited from your parents and cannot be taught. Technique is something, which you need to have to do a skill. It is often confused with skill. To perform a particular skill in any sport you will need to have a required technique. Discussion/Conclusion The idea that ability cannot be enhanced I believe is wrong. Speed, flexibility and hand/eye co-ordination can all be enhanced. Working on muscular strength in your legs can enhance speed and hand/eye co-ordination can be improved by special methods. The idea that technique has to be good to enhance certain skills I also think is wrong due to some athletes having irregular techniques, but still excel in there sport such as Michael Johnson, who was one of the greatest 400m runners in the world. Overall having good ability and having a technique that suits your body type develop skill. ...read more.