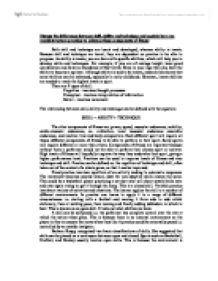 Discuss the differences between skill, ability and

Discuss the differences between skill, ability and technique and explain how you would structure practices to enhance these components of fitness Both skill and technique are learnt and developed, whereas ability is innate. Because skill and technique are learnt, they are dependent on practice to be able to progress. As ability is innate, you are born with specific abilities, which will help you to develop skills and techniques. For example, if you are of average height, have good coordination and have an abundance of fast-twitch fibres in your legs then you have the ability to become a sprinter. Although ability is said to be innate, research has shown that some abilities can be enhanced, especially in early childhood. However, innate abilities are needed to reach the highest levels in sport. There are 3 types of skill: Cognitive - involves thought processes Perceptual - involves interpretation of information Motor - involves movement The relationship between skill, ability and technique can be defined with the equation: SKILL = ABILITY + TECHNIQUE The other components of fitness are: power, speed, muscular endurance, mobility, cardio-vascular endurance, co- ordination, local muscular endurance anaerobic endurance, and reaction time and body composition. ...read more.

In practice one learns to apply it to a range of different circumstances i.e. starting with a football and moving it from side to side whilst stationary, then at walking pace, then running and finally adding defenders in which to beat. This is known as an open skill. It tests out what abilities we have. A skill can be self paced i.e. the performer has complete control over the rate at which the action takes place. This is because there is no external environment so the player is free to execute the move when they like A practice could be externally paced i.e. controlled by an outside instigator. Barbara Knapp recognised two basic classifications of skills. She suggested that skills can be placed on a continuum between open and closed. Sports such as Basketball, Football, and Hockey usually involve open skills. This is because the environment is constantly changing and so movements have to be continually adapted. Therefore, skills are predominantly perceptual. The skill is mostly externally paced, for example a pass in football. To practice open skills you would tend to use a externally paced exercise as this would create a match-like situation by putting you ...read more.

The pure-part method breaks the skill down into smaller parts, which are learnt separately and practiced until they have been perfected. All of the parts are then joined together to perform the whole skill. If you were practicing swimming you could break the stroke down into various drills. You could also use floats to concentrate on the arms and legs individually. As ability is innate, we an enhance it. Working on muscular strength in your legs can enhance speed and hand/eye co-ordination can be improved by special methods, which have been put forward by experts on the subject. And also that certain coaching methods can improve an athletes overall ability. The idea that skill equals ability plus technique is the perfect way to describe how to be able to achieve a particular skill. However there are a number of different aspects which come into consideration when performing a skill and being successful at that skill. Skills can be enhanced easily through training, as long as the athlete's technique, ability and the type of skill that is being trained have all been taken into account, before setting up a training program Overall skill is developed by having good ability and having technique that suits your body and mind, with a thought out training programs to suit you. ...read more.