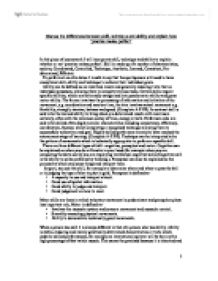 Discuss the differences between skill, technique and ability and explain how 'practice makes perfect'

Discuss the differences between skill, technique and ability and explain how 'practice makes perfect' In this piece of coursework I will incorporate skill, technique and ability to explain whether or not 'practise makes perfect'. Skill is made up of a number of characteristics, such as; Coordinated, Controlled, Technique, Aesthetic, Learned, Consistent, Pre-determined, Efficient. To perform at an elite status it is safe to say that the sportsperson will need to have exceptional skill, ability and technique to achieve their individual goals. Ability can be defined as an inherited, innate and generally enduring traits that an individual possesses, allowing them to complete various tasks. Certain skills require specific abilities, which can be broadly categorised into psychomotor ability and gross motor ability. The former involves the processing of information and initiation of the movement, e.g. coordination and reaction time; the later involves actual movement e.g. flexibility, strength, stamina, balance and speed. (Complete A-Z PE). In contrast skill is said to be the learned ability to bring about pre-determined results with maximum certainty, often with the minimum outlay of time, energy or both. Performers who are said to be skilled often display similar characteristics including consistency, efficiency, coordination, fluency, whilst completing a recognised technique allowing them to successfully achieve an end goal. ...read more.

Technique is yet again different to both ability and skill, technique can be learnt and changed so it is not inherited, a elite long jumper is not born with technique but can practise and learn the specific movements on how to approach the board and also the specific movements on how to take off from the board and what to do in the air. A key role in practise is whether it is variable or fixed (which directly links to massed, distributed practises and whole and whole/part approach). * Variable practise- training which allows an open skill to be practiced in a variety of situations to allow a strong schema to be established. For example this sort of practise could be used for football training where the player practises their dribbling around cones and then dribbling differently. * Fixed practice- a specific movement pattern is practised repeatedly. Often known as 'drills'. A good example of this is basketball drills, where the individual just practises their shooting over and over again. * Massed- the skill is practised until learned without taking any breaks, a good example of this technique is long distance training which usually consists of the athlete running a distance (maybe 800metres or 400metres depending on their event but always a lower distance from the event they compete in) ...read more.

Wilkinson is one of the best rugby union fly half in the world and trains every day for several hours just taking conversions (the ideal model for the argument 'practise makes perfect') and usually gets all of the conversions but a human can't be perfect and even he misses a few ( 0.2%) , this must prove that even the most dedicated of sportsmen/sportswomen, even if they practise all the time, cannot be perfect as their are always surrounding environmental issues such as pressure which need to be taken into account when performing the skill. Referring to the title 'practise makes perfect', practise is said to be; 'A set of processes associated with practice or experience leading to relatively permanent changes in the capability of skilled performance' (R.Schmidt. Sport and PE) 'A change in the capability of the individual to perform a skill that must be inferred from a relatively permanent improvement in performance as a result of practise or experience' (R.Magill. Sport and PE) My conclusion is that practise can't make perfect. Nothing that exists is perfect, an athlete can seem to be the best in the world and the best that people have ever seen but if you examine every movement of the athlete (incorporating ability, technique and skill) they are not perfect. ...read more.