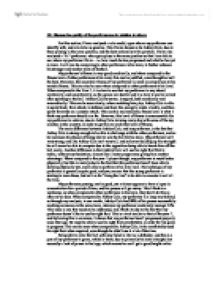 Discuss the quality of the performance in relation to others

D1. Discuss the quality of the performance in relation to others For this section, I have analysed a role model, upon whom my performer can identify with, and aim to be as good as. This I have chosen to be Ashley Cole, due to them playing in the same position, and the best nationally at his position. I have also analysed a Yr 7 performer, who again plays in the same position so that I am able to see where my performer fits in - i.e. how much he has progressed and what he has yet to learn. I will also be comparing to other performers in his team, to further enhance his stronger and weaker areas of football. My performer's fitness is very good aerobically, and when compared to the fitness level of other performers at his level, this can be justified, even though he isn't the best. However, the anaerobic fitness of my performer is weak in comparison to his aerobic fitness. This can also be seen when compared to other performers at his level. When compared to the Year 7, it is clear to see that my performer is way ahead aerobically, and anaerobically, as the games are shorter and it is clear to see he is tired after sprinting to the ball. ...read more.

This issue is one that needs to be addressed, and I think its due to the fact that my performer doesn't like to use his right foot. This is a trait similar to that of the year 7, and by having this in common, it shows that my performer hasn't progressed properly since that age. He must be able to use his right foot comfortably, in order for his game to progress. This can be seen when compared to Ashley Cole, as he comfortably used his right foot when required, even though he didn't use it a lot of the time. Being able to clear the ball with your head is vital as a defender, and this is a part of my performer's game, which is weak, due to primarily his lack in height, but secondly a lack of power in his legs, which means he can't get a good height on his jump in order to be able tom compete. This, when compared to the year 7 isn't much of a problem as they are all similar heights, and there aren't too many long balls or high crosses played. When you compare my performer to Ashley Cole, who isn't tall himself, you can still see a clear difference in their heading. The reason for this is that Ashley Cole is able to make up for the height difference, by being able to jump highly, and therefore being able to compete. ...read more.

The positional sense of my performer I feel is a strong part of his game, and I think when compared to other performers in his team, he is high on the list, as he seems to be "at the right place at the right time". Ashley Cole, I feel is better positionally still, but only due to his wider amount of experience and the high level he has played at. The positioning of the year 7, in contrast though is poor, and more often than not is somewhere he shouldn't be. My performers arousal when performing, I feel really lets him down, as I feel that if he was more alert he would already be a better player. I think that he goes through patches of good and bad play due to his low alertness levels, and if they were altered, his performance would improve accordingly. When compared to Ashley Cole, his alertness levels are very low, as when Ashley Cole plays, he always is on his toes and waiting for the ball to be passed to him, or to challenge for the ball. By being alert, he is able to get to the ball quicker than if he wasn't as alert. The year 7 performer I feel, is too alert, due to him running around the pitch, trying to get to the ball, not remembering to stay in position. ...read more.