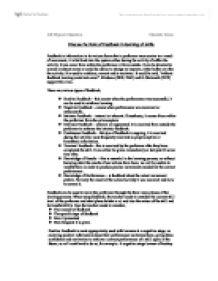 Discuss the Role of Feedback in learning of skills

A/S Physical Education Charlotte Evans Discuss the Role of Feedback in learning of skills Feedback is information in its various forms that a performer may receive as a result of movement, it is fed back into the system either during the activity of adfter the activity. It can come from within the performer or from outside. It can be directed to correct or detect errors or could be advice to change to improve, either before or after the activity. It is used to reinforce, correct and to motivate. It could be said, "without feedback learning could not occur". Bilodeau (1959, 1961) ...read more.

* Continuous Feedback - this tpe of feedback is ongoing, it is received during the activity, most frequently received as proprioceptive or kinesthetic information. * Terminal Feedback - this is received by the performer after they have completed the skill. It can either be given immediately or delayed till some time after. * Knowledge of Results - this is essential in the learning process, as without knowing what the results of our actions have been, we will be unable to modify them in order to produce precise movements needed for the correct performance . * Knowledge of Performance - is feedback about the actual movement pattern. ...read more.

Positive Feedback is most appropriately used with learners at a cognitive stage, as receiving positive information about their performance motivates them, giving them confidence and motivation to achieve a correct performance of a skill again in the future, so will work hard to do so, for example. A cognitive stage learner of hockey is doing a push pass and has succedded in doing the push pass correctly; giving positive feedback saying that is was correct and good would motivate the learner to try and do the correct movement and skill again. Feedback at the cognitive stage of learning is to move the performer through the three phases of learning, being the cognitive stage, associative stage and autonomous stage. Positive feedback given to autonomous performers can be used ut appropriately, as too much positive feedback can demotivate autonomous st ...read more.