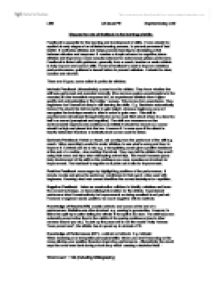 Discuss the role of feedback in the learning of skills Feedback is essential for the learning and development of skills. Errors should be spotted at early stages of an athletes learning process, to prevent permanent 'bad habits'. It motivates athletes and helps promote learning by developing a link between stimulus and response. It creates a simple schema for cognitive phase athletes and improves a more complex schema for autonomous phase performers. Feedback is linked with guidance; generally from a coach, teacher or senior athlete to help improve and correct skills. However feedback's used to improve mistakes post-performance, guidance's issued before to prevent mistakes. It should be clear, concise and relevant. There are 8 types, some suited to particular athletes. Intrinsic Feedback (kinaesthetic) comes from the athlete. They know whether the skill was performed and executed correctly (the nervous system-proprioceptors in the muscles) it's the immediate response felt, so experienced athletes have higher quality and understanding of the bodies' senses. This comes from experience. Thus beginners don't benefit as they're still learning the skills. E.g. Beckham automatically knows if he struck the ball correctly to gain height, whereas beginners may not recognise the technique needs to alter in order to gain more. ...read more.

The skill becomes externally paced rather than in the middle of the pacing continuum (due to other runners around you etc.) To pick up the pace and to run the model Kelly Holmes "even paced race", the athlete has to speed up to win/set a PB. Knowledge of Performance (KP) - extrinsic or intrinsic. E.g. intrinsic: When bouncing on a trampoline perceptual skills inform you aren't bouncing on the cross altering your position therefore improving performance. Alternatively the coach says the arms were bent during a front drop which causing a technical fault - extrinsic. Cognitive skills are now developed because if this was the only fault with the skill, the athlete would become associative with it. Focus can be on straighter arms. At the same time perceptual skills would improve due to landing on the cross. Recent research shows that although performers favour KR over KP, KP is more effective in improving performance; includes negative feedback i.e. recognising technical/tactical mistakes allows improvement. Also KR may not reflect the performance e.g. a football team win 3-1 but their opponents were better for 80 minutes of the match. ...read more.

Fine skills also require terminal feedback as they must be controlled and accurately taught, not practised till the player has formed an incorrect technique. Guidance is similar to associative at autonomous phase and intrinsic becomes the most important form of feedback for the same reasons as associative. However schemas are more complex from experience. There is no conscious thought whilst performing and the skills are perfect which results in model technique and execution. E.g. an autonomous hockey player has open skills when dribbling because they are always conscious of the opposition and the need to attack. In conclusion, feedback is essential to the learning of skills if the skills are to be learnt correctly. It motivates athletes and helps promote learning by developing a link between stimulus and response. There are various types of feedback most useful for different athletes according to age, ability and reason for participation: Cognitive phase athletes depend on positive feedback and lots of guidance in order to gain confidence, whereas associative and autonomous phase athletes depend on negative and intrinsic feedback in order to perfect their performance. Through negative feedback mistakes can be identified and improved upon by the development of the schema. ...read more.