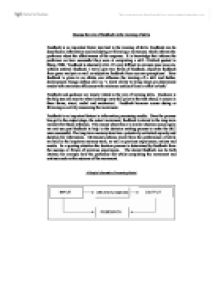 Discuss the role of feedback in the learning of skills Feedback is an important factor involved in the learning of skills. Feedback can be described as information received during or following a movement, which informs the performer about the effectiveness of the response. It is knowledge that informs the performer on how successful they were at completing a skill. Crisfield quoted in Sharp, 1986, 'Feedback is absolutely vital. It's very difficult to evaluate your own role without external feedback. I try to give two forms of feedback, objective feedback from game analysis as well as subjective feedback from my own perceptions'. How feedback is given to an athlete can influence the learning of a skill and further development. Knapp defines skill as 'a learnt ability to bring about pre-determined results with maximum efficiency with minimum outlay of time or effort or both.' Feedback and guidance are closely linked in the role of learning skills. Guidance is the help you can receive when learning a new skill prior to the task ahead, it occurs in three forms; visual, verbal and mechanical. Feedback however occurs during or following an activity concerning the movement. Feedback is an important feature in information processing models. Once the process has got to the output stage, the actual movement, feedback is stored in the long-term memory for future reference. ...read more.

The positive feedback is stored in the long-term memory so in future situations the player can use this experience in the decision making process as it was successful before. Positive feedback is effective when aimed at performers at the cognitive stages of learning as this helps them develop skills and is also a form of motivation. It is necessary to always give correct feedback to prevent the performer repeating mistakes in a similar sporting situation. In individual games the coach would need to provide more positive feedback than in team games, as the performer doesn't have the rest of the team to encourage and support them. Negative feedback outlines what is incorrect about a performance and how to correct this. Negative feedback provides the performer with the knowledge of what not to repeat in similar situations, which can be used in the input stages of the information processing model. This form of feedback is more ideally suited to a performer at the autonomous stage of learning. This is because they can use this information constructively to improve their performance. Too much negative feedback towards cognitive learners could de-motivate them. Intrinsic feedback is continuous and comes from within the performer, the proprioceptors are used to provide the information on the body's position. Intrinsic feedback is also better suited to the autonomous learner, rather than a cognitive learner, as they have more experience, therefore have developed a good kinaesthetic awareness in sport to be able to feel if a skill is successful. ...read more.

The feedback can be stored and later used in similar situations. However it is not as useful as knowledge of performance as the player may not have a correct memory of how they achieved the results. This is more beneficial to a cognitive learner as they can see the outcome and result. The graph below shows that although feedback does have an influential affect on performance, feedback alone cannot completely improve performance. When a performer sets goals as well as receives feedback the level of performance increases significantly. Goal setting is important because it reduces uncertainty, confidence increased, learning is focused and feedback is specific. All individuals have different personalities which may affect the learning of skills, for example extroverts are better suited to different sports than introverts and therefore more motivated to learn specific skills. Other factors such as ability and frequency of practice will also play a key role in successfulness of performance as well as differences between social backgrounds, and differences mentally and physically. In conclusion, feedback has an important role in the learning of skills. It provides information so correction can be made and successful skills repeated, it also supplies motivation when a skill is done accurately and reinforces correct movements so they can be repeated. Feedback from can be stored in the long-term memory for future reference. There are many different forms of feedback and each can be aimed at certain individuals. However feedback is not the only factor involved in the learning of skills. ...read more.